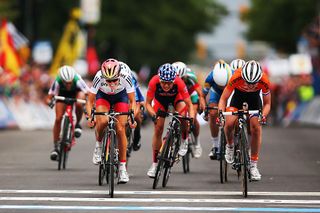 Axel Merckx – the manager of the Hagens Berman Axeon development team – is hoping to bring the UCI Road World Championships back to the USA in 2025 or 2026, with Portland, Oregon, the possible destination for the event.

Canada-based Merckx – who is the son of five-time Tour de France champion Eddy Merckx – told Het Nieuwsblad that it's still early days, but that he's strongly involved, and passionate about bringing the event to Portland.

"The plans look good, but are in their infancy," Merckx said. "The organisers have yet to gather the funds, and we're also counting on the support of the local authorities.

"We're hoping to organise the Worlds for 2025 at the earliest, but it could be 2026," he said. "So there's still some time. We are working hard on it, and would have liked to have had our file ready by the end of the year, but it may be a little later due to the coronavirus crisis."

Merckx – who won a stage of the Giro d'Italia in 2000 and took bronze at the 2004 Olympic Games road race – explained his role: "I'll help outline the course, among other things. The organisers want to make it attractive, but it should not become a battlefield, either. I think a World Championships [road race] circuit should offer every type of rider a chance to win the rainbow jersey."

With the COVID-19 pandemic still ongoing in Europe, the Middle East has been mooted as a possible alternative for this season's World Championships, which are currently scheduled to take place in Aigle and Martigny, in Switzerland, in their original 2020 calendar spot of September 20-27.

The Worlds are then due to take place in Bruges and Leuven in Belgium in 2021, Wollongong in Australia in 2022, Glasgow, Scotland, in 2023, and Zurich – in Switzerland once again – in 2024. An African country is likely to be given precedence for 2025, but the USA would also be a strong candidate.