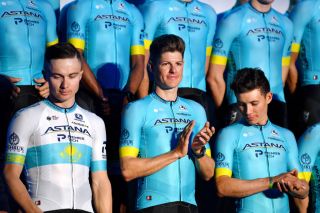 Astana have confirmed that their riders and staff have had their salaries cut by 30 per cent, citing the economic impact of the coronavirus pandemic on the team and their backers.

The pay cut comes into effect from this month and will remain in place until the cycling season resumes. The Astana team leaders include Jakob Fuglsang, Alexey Lutsenko and Miguel Angel Lopez.

All races are currently suspended, with the Spring Classics and Giro d’Italia among the events to be postponed. The UCI is due to meet with stakeholders on Wednesday to discuss possible dates for the resumption of the season, but it is still unclear when or whether competition will start again and how the new calendar will look.

"Starting from April 2020, Astana Pro Team will cut the salaries of riders and staff with 30 per cent until the team will start racing again," managing director Yana Seel said in a statement.

"This has been decided because of the economic crisis of the organization and its sponsors due to the Covid-19 virus."

In March, Spanish newspaper AS reported that Astana’s riders and staff had not yet been paid for the opening months of the year. The team cited administrative delays but insisted that their 2020 budget had been approved in full by Kazakhstani sovereign wealth fund Samruk Kazyna.

"We want to make clear that all the salaries until now have been paid for the full 100 per cent and that we are planning to pay the full amount again as soon as the crisis is over, and the team is able to race again," Seel said. "All the riders and staff respected the decision, as they are aware that this is an exceptional decision in exceptional times."

Astana are the second WorldTour team to confirm salary cuts for management and riders during cycling’s hiatus due to the coronavirus pandemic after Lotto Soudal, who also placed 25 staff members on temporary unemployment. Other teams have used national unemployment benefits to help pay staff salaries.

"These are hard times for the world of cycling and for our team as well. We have to deal with it until the crisis is over, but for sure it’s not an ideal situation," said Astana manager Alexandre Vinokourov.

"We can only hope it’s over really soon so we can focus again on winning races. We decided to cut 30 per cent of the salaries for everybody in the organization, as we have to get through this together and everyone is just as important to the team as anyone else."