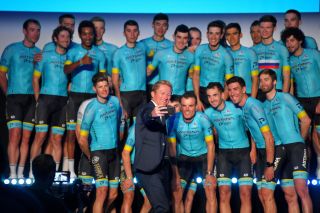 After a delay in paying their staff for the first two months of the year, Astana Pro Team have now reportedly asked their riders to take a pay cut for the next three months as a result of the coronavirus pandemic.

According to Spanish titles AS and Ciclo21, the Kazakh squad is cutting salaries across the organisation by some 30 per cent. The team have yet to officially announce the pay cuts but are expected to make a statement later on Monday.

Astana follow another WorldTour outfit, Lotto Soudal, in cutting wages, with the 27 riders on the Belgian squad, along with its entire management and administrative staff, all agreeing to waive a chunk of their salary. Other teams have used national unemployment benefits to help pay staff salaries.

While Lotto Soudal riders will be paid as normal again once racing resumes, Astana have reportedly cut pay for a three-month period, which could be extended.

The measure follows news earlier this month that Astana riders had not been paid in the first two months of 2020, a repeat of the situation in 2018.

At the time team manager Alexander Vinokourov denied the team were in serious financial difficulty.

"As we are being sponsored by official government organization [Samruk Kazyna], sometimes there is a delay of payment due to slow administrative processing of the funds approval," Vinokourov said earlier this month.

Although some way short of last year's storming start to the season, Astana performed well before the coronavirus pandemic halted racing.