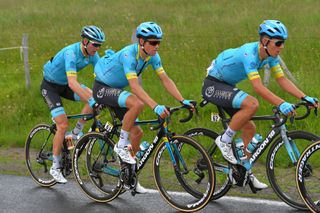 WorldTour team Astana have announced the end of their relationship with bike supplier Argon 18 following three seasons of collaboration.

The end of the 2019 season signalled the end of Argon 18 and the team's original three-year agreement, which began in 2017, but the contract has not been extended for 2020.

"These last three seasons have been marked by multiple race wins and the launch of new products developed in collaboration with the team, and tested by Astana Pro Team riders on the most demanding WorldTour circuits," said Argon 18 president and CEO Martin Le Sauteur in a press release.

Astana general manager Alexandre Vinokourov added: "It was a great pleasure and honour for us to work with Argon 18. We've spent three fantastic years together, full of success and high sports achievements. I would like to thank Argon 18 for the sponsorship, support and contribution to the development of Astana Pro Team.

"After these three years of close collaboration we part as good friends," he continued. "I wish Argon 18 all the best in the future and I'm sure that the company will see more beautiful successes in their current new projects."

Argon 18 are also the current suppliers of the German Continental-level Vorarlberg-Santic team, as well as to the Australian, Danish and Canadian cycling federations.

It's rumoured that Astana's bike supplier in 2020 could be Italian company Wilier, but the team has yet to announce Argon 18's replacement.