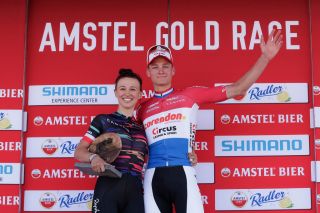 Organisers of the Amstel Gold Race are confident they will secure a place on the revised 2020 UCI International Road calendar this fall, along with other major one-day races that have been postponed due to the COVID-19 pandemic.

According to a Sunday report in the Dutch news outlet NOS, race director Leo van Vliet said: "I dare say we are going to be part of it."

The UCI has suspended all cycling races until July 1 and is working with race organisers to determine date changes for those events that are postponed and trying to put together a potential late-season calendar.

The sport's governing body has placed a priority on the three Grand Tours, the five Monuments, the World Championships (September 20-27), and the European Championships. It has moved the majority of the cycling nations' national championships to the weekend of August 22-23.

A revised version of the UCI Women’s WorldTour calendar and a new version of the entire UCI International Calendar (men’s and women’s races across all cycling disciplines) can be expected by May 15.

Amstel Gold Race is not one of the five Monuments on the men's calendar but it is the first round of the Ardennes Classics and hosts both men's and women's WorldTour races on the same day. Van Vliet said he has discussed a potential new race date with the UCI.

"We have already talked about dates, even early on the calendar," Van Vliet told NOS. "If they make a new calendar, they will not move afterwards. I have high hopes and information that I will succeed."

Amstel Gold Race originally scheduled its WorldTour men’s and women’s races for Sunday, April 19, but, like many other races, was forced to cancel due to public health restrictions surrounding the COVID-19 pandemic.

The UCI has already rescheduled the Tour de France from August 29 to September 20, and it has been speculated that the Giro d’Italia could be held in October and the Vuelta a España in November.

Although the five Monument dates are still to be confirmed, NOS reported that possible dates for Milan-San Remo and Paris-Roubaix could be in August, while Tour of Flanders, Liège-Bastogne-Liège and Il Lombardia could be held in October.

Van Vliet said he hopes the 2020 edition of the Amstel Gold Race will also slot into an October date. "October, that would be six months from now? That would be the most ideal," Van Vliet said. "We respect the Monuments, but we certainly participate."

The 2019 editions of the men's and women's Amstel Gold Race were two of the most exciting of the season, with Mathieu van der Poel (then Corendon-Circus) and Kasia Niewiadoma (Canyon-SRAM) securing victories in their respective events.