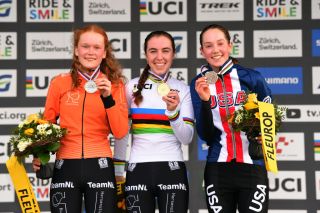 Madigan Munro is focusing on her final season as a junior in the mountain bike category after picking up bronze at the UCI Cyclo-cross World Championships this weekend.

The 17-year-old American national champion put in a gutsy ride to gap her rivals and pick up bronze in her first-ever women's junior cyclo-cross world championships in Dubendorf, Switzerland.

"It was a pretty challenging race but I had a lot of fun, I'm pretty proud of my result and excited for more.

"The course was surprisingly challenging, pretty bumpy with some pretty steep flyovers. It was definitely a tough course, it took a lot of attrition and endurance to get through four laps strongly.

"I tried to be strong mentally and keep pushing through as I know the bike race is only four laps and eventually will end."

Munro, from Boulder, Colorado, started mountain biking at the age of 11 and only took up cyclo-cross in 2018.

After finishing sixth in the Mountain Bike World Championships last year she will re-focus ahead of the new mountain bike season.

"I have a full season of mountain biking ahead and it will be my last year in the junior category so hopefully a few trips with USA National Cycling," said Munro.

"And then it will be onto my first season in cross as an under-23 next year. I love them both pretty equally, I've definitely been doing mountain biking for longer so I feel a lot more experienced in that field but I enjoy both of them and it's great to have the chance to switch back and forth."

When asked about the challenges of riding a full season on the mountain bike and cyclo-cross? Munro added: "I love the sport so much and every year I do it I love it even more.

"I don't think it's challenging for me to move on and I think there are a lot of skills in mountain biking and 'cross that transfer really well.

"It's actually really helpful for both disciplines to have that other side."

Next year, only one Cyclo-Cross World Cup round will be held in the United States with the other 13 taking place in Europe.

Munro says that having the Mud Fund has helped her race in Europe more this season, but admits it has been difficult to race in Europe.

"I has been difficult in the past as last year as a first-year junior in cyclo-cross and mountain biking I only did one World Cup in cyclo-cross, which was Hoogerheide right before worlds," added Munro.

"It is challenging I mean there are a lot more races here in Europe. But this year especially we've been really lucky to have the Mud Fund which has helped a lot.

"We were able to do a whole block of racing over Christmas in cross and did two World Cups in Europe and three other races.

"That was amazing and super-helpful thanks to the Mud Fund."