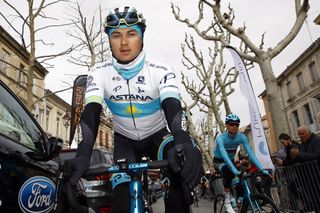 Kazakh road race champion Alexey Lutsenko says that he hopes to restart his 2020 season at Strade Bianche on August 1, followed by Milan-San Remo and the Tour de France at the end of the month. The Astana rider, who's based in the south of France, can now train outside again with some coronavirus-lockdown measures having been eased, and says he's pleased to have been able to put his home trainer away for now.

Vinokourov: Astana will fold if we don't race again in 2020

Lutsenko had started his 2020 season well, taking third place overall at the Tour de la Provence in mid-February, where top-five finishes on three of the four stages netted him the points jersey, followed by third overall at the UAE Tour later that month, where he also took top-three finishes on two of the stages.

The 27-year-old admitted that it was a little disappointing that the season was then put on hold after he'd enjoyed some good form, but hopes that the postponement of the Olympic Games – one of his big goals this season – may work in his favour.

"It was a bit of a shame, but there was no alternative to this decision, was there?" Lutsenko said in an Instagram Live interview that was published on his team's website on Tuesday. "What if one more year [until the Olympics] turns out to be a bit of a blessing in disguise for me? The more experience I gain, the more quality I can put into my preparation.

"There is a special place for the Games, both in my head and in my heart, but right now I need to focus on a season that's going to be packed into just a few months, and which is looming on the horizon," he said, with the focus now being on the first couple of months of the rescheduled second half of the year.

"My first race after the restart should be Strade Bianche [August 1], then Milan-San Remo [either August 8 or 22], and then full gas into the Tour de France," said Lutsenko, with the Tour scheduled for August 29-September 20. "I think it will be a very exciting season, and we can expect a lot of spectacular racing, as we, as riders, will be pressed for time to show our true worth.

"I hope it might attract even bigger audiences to cycling, too, due to such big events as the Olympics and the [football] European Championships being postponed until next year," he said.

'My home trainer is recovering in the box'

Lutsenko appears to have weathered cycling's shutdown and the COVID-19 lockdown as well as anyone, but is pleased to now be able to train outside once more.

"My wife said I looked like I was ready for my first day of school," he said. "It felt pretty strange for the first half an hour, having been glued to a fixed bike for almost two months, and then, all of a sudden, I found myself sharing the road with cars, negotiating all those bumps and turns. My skills were pretty quick to return, though.

"My home trainer is recovering in the box at the moment, but I owe it quite a lot," Lutsenko added. "It made all the difference when everybody was locked down here in the south of France.

"Normally I'm a regular visitor of the local gym, but that was out of the question, of course, so I had to think about finding an alternative. I stuffed my backpack with bottled water and some books, to make it weigh around 15kg, and kind of hiked up and down the stairway," he explained. "It turns out that four times up and down a 19-storey apartment block is a good alternative to weight training."

Asked whether he'd managed to maintain his racing weight while observing the stay-at-home rules, Lutsenko admitted that he'd taken a more realistic approach.

"I'd say that I wasn't obsessed with the idea of counting every gram of bodyweight," he said. "I know that a week of steady riding on the road in the heat is more than enough for me to shed a couple of extra kilos. Trying to stay at race weight during a period like that seemed to me as though it was going to be a real threat to your mental health when you were already stressed enough."

And while being able to train outside once again was welcome, with the revamped racing season on the horizon, there are aspects of being at home that Lutsenko said he would miss.

"It was the first time in a while that I could stay with my family for so long," he said, "and so I'm beginning to realise now how hard it will be to leave them next time for a stage race or a training camp.

"As you can imagine, it wasn’t easy for the children to stay put without the chance of even a short stroll, but we got by somehow," continued Lutsenko. "For me, the only sort of outing I got was a weekly visit to a supermarket – that's it.

"It came naturally to me, though, to act in a responsible way as I'd already felt the reality of COVID-19 as early as in February, when we were quarantined in our hotel at the end of the UAE Tour. But, as far as I know, there are very few – next to zero – cases in the neighbourhood where we live, and that shows the community spirit that people have had here."