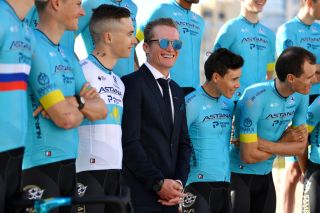 After UCI President David Lappartient warned of teams disappearing as a result of the COVID-19 pandemic, Astana manager Alexandre Vinokourov has said he thinks his team will fold if they can't race again this year.

The Kazakh squad have already had to impose salary cuts on their riders and staff, with the likes of Jakob Fuglsang and Miguel Angel Lopez losing 30 per cent of their pay until racing resumes.

The lion's share of the funding for the WorldTour team, created in 2007 after the demise of the Liberty Seguros team, comes from the sovereign wealth fund Samruk Kazyna, which controls a number of state-run companies in Kazakhstan.

"We've done all we can with the team and the sponsors. In Kazakhstan, as is the case across the world, things are complicated, with oil, with the currency," Vinokourov told French website Cyclism'Actu.

As such, Vinokourov is greatly encouraged by the new 2020 calendar produced by the UCI last week, which he described "a miracle".

The Tour de France will be held from August 29-September 20, with an October Giro d'Italia overlapping with an 18-stage Vuelta a España that runs into November. The World Championships follow the Tour and the spring Classics largely take place in October.

"We needed a calendar and it was a great job from the UCI president and the team around him," Vinokourov said.

"All the big events, like the Olympic Games and European Championships, have been cancelled, and for our sport it's important to race this year to survive, so I think the UCI has done a good job with this calendar, which is obviously very dense but I understand all the organisers who want to hold their races.

"It's going to be bizarre to have the Tour de France in September and the other races later on but it's good for the fans because they'll be able to watch cycling on TV."

Astana have not finalised their plans for the newly designed season, but Vinokourov indicated they won't veer far from the original script, with Lopez tackling the Tour de France and Fuglsang the Giro, even if it means the Dane missing Liège-Bastogne-Liège, which he won last year.

"The Tour is going to be difficult with all the big riders who will be there. Lopez will go to learn but I want to see his limits, and how far he can go," Vinkourov said.

"The Giro is more accessible. I know [Vincenzo] Nibali will be there but Fuglsang, with a good team around him, has a chance of winning."