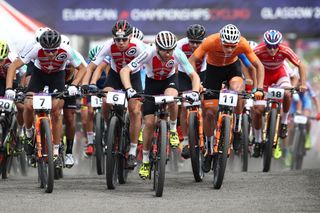 The UCI has announced the postponement of the 2020 Mountain Bike Cross-Country World Championships due to the coronavirus pandemic. The Worlds were due to take place in Albstadt, Germany from June 25-28, but have been postponed due to restrictions on sporting events and public gatherings in Germany.

“The UCI fully supports the decision taken by the City of Albstadt, the German cycling National Federation (BDR) and the State of Baden-Württemberg. In view of the current sanitary situation across Europe and the world, holding the annual flagship of the discipline would have potentially posed a risk to the health of the riders, all those involved in the event and the fans,” read a statement on Friday.

This year's Worlds were scheduled for an earlier June date to avoid a clash with the Tokyo 2020 Olympic Games, which have since been postponed until 2021.

The UCI added that it would attempt to find a place on the revised calendar for the Worlds later in the season and noted that the event would be given priority over all others in the discipline.

“In accordance with the decisions announced on March 20 concerning disciplines other than road, in connection with the coronavirus, the UCI stresses that the UCI World Championships have priority within the framework of the revision of the UCI International Calendar with a view to the resumption of the 2020 season,” read the statement.

Thus far, a total of nine UCI Mountain Bike World Cup events in the cross-country, downhill and eliminator disciplines have been postponed or cancelled as a result of the Covid-19 pandemic.

The Tokyo 2020 Olympics have also been postponed until 2021, thus removing the centrepiece of the current cross-country mountain bike season from the calendar.

Cyclo-cross world champion Mathieu van der Poel (Alpecin-Fenix) had made the cross-country event in Tokyo the principal target of his 2020 season, but the Dutchman had also planned to compete in Albstadt for the rainbow jersey as part of his build-up to the Olympics.