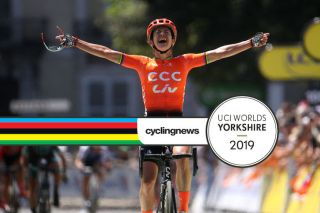 The top cyclists in the world will line up for a shot at winning the coveted rainbow jersey at the elite women's road race on September 28 at the 2019 UCI Road World Championships in Yorkshire. The Dutch team will once again field the strongest roster with former world champions Marianne Vos, Chantal Blaak and defending champion Anna van der Breggen. However they faces some strong and experienced rivals including Italy's Marta Bastianelli, the USA's Coryn Rivera and Yorkshire native Lizzie Deignan who leads the Great Britain team.

The women will race 150km starting in Bradford and travel as north as Masham, in North Yorkshire, before looping back south toward the three undulating finishing circuits in Harrogate.

Cyclingnews has selected 10 riders to watch for the elite women’s race at the Yorkshire World Championships.

Marianne Vos is a three-time road race world champion having secured those titles in Salzburg in 2006, Valkenburg in 2012 and Florence in 2013. It’s been six long years since she last donned the road race rainbow jersey and she will be aiming to reclaim it and keep it within the Netherlands.

Vos has never looked more primed for the road race; set on a lengthy Classics-style course that suits her ability to both power climb and sprint. She has proven to be one of the most dominant riders of the season winning Trofeo Alfredo-Binda, Tour de Yorkshire and a stage at the OVO Energy Tour.

All eyes will be on Vos, who will be surrounded by her powerful Dutch team, to see whether she can take back the rainbow jersey and add a fourth road race world title to her collection.

If there has been anyone to challenge Marianne Vos in a head-to-head sprint this year, it has been Italy’s Marta Bastianelli.

The Italian champion has enjoyed immense success this season. Victories included Omloop van het Hageland, Ronde van Drenthe, followed by the iconic Tour of Flanders. She went on to victories at Gracia Orlova and Thüringen Ladies Tour, but she was forced to take a break and recover from a knee injury. The recovery period meant that she had to skip the Giro Rosa, but she returned stronger than ever with a first-ever victory at the Italian National Championships.

She had the opportunity to test her world championship-legs at the Postnord Vargarda WestSweden where she beat Vos in a sprint to the line. The victory gave us a preview of what to expect of Bastianelli and Vos in Yorkshire. Bastianelli will also have a stellar line-up of support from the Italian team that includes Elisa Longo Borghini and Letitzia Paternoster, who are good enough to be contenders in their own right.

Bastianelli is no stranger to the rainbow jersey. She won the world title in Stuttgart in 2007 by six seconds ahead of Vos, and she knows what it will take to win it again in Yorkshire.

Coryn Rivera will be Team USA’s best shot at the world title in Yorkshire, on a course that undeniably suits her characteristics as a punchy sprinter.

She was all-in to support her teammates during the previous year’s mountainous parcours in Innsbruck. Even though that course wasn’t her cup of tea, she put forth a tremendous performance by forcing a nearly all-day breakaway. It’s time for her teammates to repay the debt in Yorkshire, where Rivera will take the start line as one of the favourites to win the world title.

She has had some astounding performances on the world-class stage over the years, such as victories at Tour of Flanders and the OVO Energy Tour. It shows that she is more than capable to winning on a Classics course in Yorkshire. It’s been nearly 40 years since an American woman last won the world title in the road race. Rivera could be the next rider to bring the rainbow jersey back to American soil. With teammates like Ruth Winder, Chloe Dygert-Owen and Tayler Wiles, she in the perfect position to attempt victory.

All eyes will be on Marianne Vos during the Yorkshire World Championships, but the Dutch team will include a number of potential winners. Defending champion Anna van der Breggen, former world champion Chantal Blaak and double time trial world champion Annemiek van Vleuten, are all capable of winning on the 150km Classics-style course.

Think winning breakaway because any of these three riders could turn one into a triumph for the Dutch team. If not then such a breakaway would be a perfect set-up for Vos to sprint to a fourth world title.

Van der Breggen soloed to the world championships victory in Innsbruck last year, albeit on a course that suited her to perfection. But she also won a record-fifth Flèche Wallonne, Tour of California and GP Plouay, all in the aftermath of her undeniable talent to force a winning breakaway. Likewise, Van Vleuten has proven time and again that she is a Classics contender. Her solo victories at Strade Bianche and Liège-Bastogne-Liège was nothing short of astonishing. Her consistency in placing second at Tour of Flanders, Amstel Gold Race and Flèche Wallonne, this year, were a solid indication that she will be a threat for victory in Yorkshire.

Poland’s Kasia Niewiadoma struck a career jackpot when she won the Amstel Gold Race this spring. She's a versatile athlete and a contender in both Classics and stage races, but her victory in the Netherlands solidified her place among the one-day specialists. She heads into the World Championships as a serious contender for a medal largely because of that victory.

If Niewiadoma shows the same savviness and power that brought her victory in Berg en Terblijt, she could very well ride away with the world title. She has not rested on just one major win this season, however, also securing top-10 places at Strade Bianche, Tour of Flanders, Flèche Wallonne and Liège-Bastogne-Liège. She was second overall at the OVO Energy Women’s Tour and then wore the maglia rosa during the first half of the Giro Rosa.

Look for her to bring a fighting spirit to the final of the Yorkshire World Championships.

Great Britain’s Lizzie Deignan will line-up in Yorkshire as a home favourite in an attempt to win a second world title, since her first victory in Richmond in 2015.

This spring, she returned from maternity leave with a strict two-year window to compete in her sport at the highest level, almost solely focused on the Yorkshire Worlds and the Tokyo Olympic Games. She had a steep trajectory in her comeback. She took on a domestique role at first, and helped her Trek-Segafredo teammates during the three Ardennes events; Amstel Gold Race, Flèche Wallonne and Liège-Bastogne-Liège, and through the Tour de Yorkshire and the Tour of California in May.

She went on to win the OVO Energy Women's Tour before taking a mid-season break. And then she focused on specific training to improve her high-end form, all geared toward winning the world title in Yorkshire.

Whether she will be Great Britain’s team leader remains to be seen, however, as the team have another contender in Hannah Barnes. Either way, Deignan said that the thought of winning a second world title in front of her family, husband and daughter, on home roads, is what makes this World Championships extra special.

If the women race the Yorkshire World Championships as hard as the Spring Classics, then we can expect to see Australia’s Amanda Spratt in the mix for a medal performance.

Spratt was second in the mountainous route in Innsbruck the previous year, but she also excels on punchy courses. She's an excellent race tactician, arguably the best in the sport, and is always among the handful of riders forcing winning breakaways.

Look for Spratt to be part of a winning breakaway. She would also be in the mix if there were a reduced bunch sprint at the end of a race of attrition. If the race should come down to a more massive bunch sprint, Australia will have a card to play in Chloe Hosking.

Cuba’s Arlenis Sierra could be one of the dark horse contenders for the Yorkshire World Championships. She is a formidable sprinter and can climb over punchy terrain with the best. She kicked off the season with a victory at the Cadel Evans Great Ocean Road Race and was just outside the top 10 during many of the Spring Classics.

Sierra also stood on the podium in two stages at the Tour of California. She found her winning legs at the Vuelta Femenina a Guatemala, and went on to win the time trial and road race at the National Championships, won the road race at the Pan American Championships, the overall title at Giro Toscana and finished third in the last two stages of the Tour de l’Ardeche.

Look for Sierra to be among the medal contenders who race to the finish line in a reduced group sprint.

Germany has several medal contenders in Yorkshire with Lisa Brennauer and Katherin Hammes. But it’s Lisa Klein who has consistently shown her strength on the world-class stage this season. She had good Classics campaign that led straight into an overall victory at the Healthy Ageing Tour. She went on to secure a stage win at the Thüringen Ladies Tour, won the time trial and placed second in the road race at the National Championships.

Her run-in to the World Championships has been solid with an overall victory at BeNe Ladies Tour, podium finishes at the European Championships and PostNord Vargarda WestSweden before winning a stage and finishing third overall at the Boels Ladies Tour.

Her strength is in the time trial, an event that she will also compete in at Yorkshire, but she will be one to watch for the road race as well.

Christine Majerus is getting better as the season progresses into the early autumn.

The Luxembourg national champion in the road race and the time trial, Majerus typically works for her Boels-Dolmans team. She's a significant support rider for the likes of Anna van der Breggen. She's also a winner in her own right when given the opportunity.

We saw as much when she won La Classique Morbihan and most recently the overall title at the Boels Ladies Tour. But even when she's working for her teammates, she is almost always in the top-10. She finished eighth at the Healthy Ageing Tour, fourth at Tour de Yorkshire, ninth at Festival Elsy Jacobs, fourth at the OVO Energy Women’s Tour, ninth at BeNe Ladies Tour, seventh at RideLondon Classique, eighth at Ladies Tour of Norway and fourth at the Madrid Challenge.

She will be the Luxembourg team leader in Yorkshire and look for her to make the most of it.