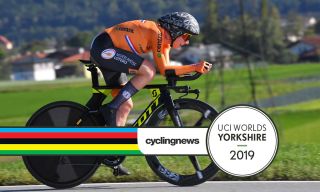 The top time triallists in the world will be in attendance at the upcoming UCI Road World Championships on September 24. The elite women will take the starting ramp, one-by-one, in Ripon and race 30km to the finish line in Harrogate. The opening 12km are flat but the course then undulates uphill, with a succession of three climbs, before the run-in to Harrogate.

Annemiek van Vleuten, 36, is the two-time defending world champion and the outright favourite to win her third consecutive rainbow jersey in the elite women's time trial in Yorkshire.

It doesn't seem to matter what type of course is presented to Van Vleuten, in terms of both distance and difficulty, she will undoubtedly excel. She has proven as much after storming to her first two victories in Bergen's 21.1km undulating course and Innsbruck's 27.5km course that included a step climb on the circuit.

She has also dominated the uphill time trials at the Giro Rosa during the two previous editions, where she won the overall titles. She isn't only a contender for the hilly to mountainous terrain, however, but is also one of the most powerful time triallists across flat terrain.

This summer she won the Dutch title over a 31.8km course in Ede with an average speed of 48.6kph. She beat her closest competition, Ellen van Dijk and Anna van der Breggen, both world-class time triallists in their won right, by a whopping minute and a half. She also won the short and flat prologue at the Boels Ladies Tour.

There are no limits to what Van Vleuten can do on a time trial bike, and so far her competition hasn't even been close to threatening her position as queen of the time trial event.

Anna van der Breggen, 29, has been runner-up in the elite women's individual time trial at the World Championships three times: Richmond 2015, Bergen 2017 and Innsbruck 2019. Her frustration at producing another silver-medal performance in Innsbruck was palpable, even if she simultaneously felt honoured to stand alongside her compatriots on the podium after Van Vleuten claimed her second-consecutive world title in the discipline and Van Dijk secured the bronze medal.

The closest Van der Breggen has ever gotten to the rainbow jersey in the time trial was four years ago when she finished a mere two seconds behind Germany's Lisa Brennauer in Richmond. Since then, the world title has become increasingly out of reach; runner-up by 12 seconds to Van Vleuten in Bergen and by 30 seconds to her Dutch teammate in Innsbruck.

Her performances in the discipline this year has not be on par with Van Vleuten's resounding success; second place by 52 seconds in the time trial at the Giro Rosa, third in the time trail by 1:49 at the Dutch Championships, and sixth in the prologue by nine seconds at the Boels Ladies Tour, all won by Van Vleuten.

The fact remains, however, that Van der Breggen is a world-class time triallist and she is Van Vleuten's biggest rival for the world title in Yorkshire. If her dream of winning the rainbow jersey in the discipline doesn't come to fruition, she will be in the running for another medal. And with Lucinda Brand also participating in the time trial, the chances are good that the Dutch team could, once again, sweep the podium.

Team USA may have a medal contender in former world champion Amber Neben, but all eyes will be on her American teammate Chloe Dygert-Owen, 22, in the elite women's individual time trial in Yorkshire. Dygert-Owen seems almost destined to win a world title in the discipline. She's been on a world-class trajectory since securing double rainbow jerseys in the junior road race and time trial in Richmond in 2015.

A multiple-time world champion in the Team Pursuit and Individual Pursuit, Dygert-Owen's name might be more synonymous with track racing, but it's only a matter of time before her name becomes more internationally recognisable in the road racing side of the sport. Dygert-Owen last competed in the time trial at the World Championships in Bergen where she finished just off the podium in fourth place.

She has been somewhat sidelined from racing for much of last season after suffering a concussion in a crash at the Tour of California. She also suffers from a degenerative back injury. After winning the Pan American Championships title in the time trial in August and then going on to sweep the Colorado Classic's four stages and the overall title, Dygert-Owen is feeling stronger than ever. She puts all of her trust into her coach Kristin Armstrong - a two time world champion and three-time Olympic gold medallist in the time trial - and is aiming to produce similar success in her own career.

Dygert-Owen comes into the Yorkshire Worlds as an unknown simply because she hasn't competed against the likes of Van Vleuten and Van der Breggen on the international stage this season. Even so, it would be remiss to discount her as a contender for the world title.

German road race champion Lisa Brennauer, 31, has been trying to find her way back into the rainbow jersey ever since winning the coveted time trial title at the Ponferrada in 2014. She was once part of the team time trial dominant Canyon-SRAM and their earlier versions Specialised-lululemon and Velocio-SRAM, but opted to leave the comforts of a successful team to breath new life into her career.

A veteran member of the WNT-Rotor, Brennauer has revived her spirit of competition, particularly as she heads into the Yorkshire World Championships and looks toward the Tokyo Olympic Games. Sharing the leadership with her new teammates has allowed flexibility to focus on specific events.

She won a stage of the Healthy Ageing Tour and won the overall title at Festival Elsy Jacobs. More recently, she won the time trial and the overall title at the Madrid Challenge by la Vuelta, hitting her stride with perfect timing, just two weeks out from the World Championships. She is cognizant that she has not placed inside the top 10 in the time trial in the last two World Championships but believes she can, once again, be a medal contender. Germany will have another strong medal contender in national time trial champion Lisa Klein.

Longo Borghini has trailed the top performers in the time trial this season with third place in the event at the Giro Rosa, behind Van Vleuten and Van der Breggen. She also helped her Trek-Segafredo team to a team time trial victory at the Postnord Vargarda WestSweden. She has not always competed in the time trial at the World Championships, often more focussed on the road race, but she has placed among the top 10 in previous editions and was fifth in the event at the Olympic Games.