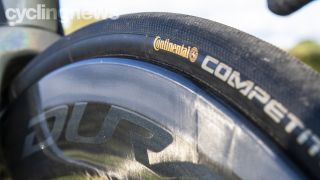 Tyres larger than 23C save you from fatigue on rougher road surfaces (Image credit: Aaron Borrill)

Road cycling efficiency is often measured in grams and watts. And the units involved with each can be so low, that to those who aren't obsessed about the sport, the idea of a few grams or watts, would appear trivial.

Considering the road bicycle and its rider as a total system, and the harmonised gain of trimming all those grams and improving the wattage efficiency makes a real difference when combined.

The calculation relating to grams and watts can be difficult to apply to the nearly intangible concept of rolling resistance. Rotational weight is easy enough to understand when comparing a heavier wheelset to a lighter one, but rolling resistance is a more technical concept.

Tyres and wheels remain the most important influences on overall road bike dynamics and yet the trend in technology and disruption has been quite modest.

For decades road riders believed that narrower tyres were superior. Conventional wisdom dictated that a smaller front surface area would generate less aerodynamic drag. Although this theory was theoretically plausible, it ignored the wheel and tyre as a bonded aerodynamic unit.

Packaging a narrow tyre on a slim rim delivers virtually no ride compliance and brutal rolling fatigue if you are spending hours in the saddle.

Wider tyres with more air volume create superior compliance and that saves you from fatigue if you are rolling big mileages. On a four-hour ride, the reduction in small-bump fatigue and overall road surface buzz can be significant with a larger volume tyre – which can be run at lower pressures.

Perhaps the most convincing argument for wider rims and tyres concerns the contact patch distribution under load. With a rider on board, any tyre compresses in its relation to the road surface.

A wider tyre is advantaged here, as it can spread more of that compressive rider load sideways (radially), instead of longitudinally. The narrower tyre will spread its rider load more proportionally longitudinally, creating greater drag with each rotation of the wheel.

But surely wider tyres must have more aerodynamic drag? The misconception about this is rooted in a failure to recognise that a slim wheel will deform a tyre's carcass.

If you mount a 23C tyre on a narrow rim, it will shape into a rounded profile. This creates a more unbalanced aerodynamic package, compared a wider 25- or 28C tyre, when inflated on an appropriately sized rim.

Many pro teams are now running 28C tyres - some are even experimenting with tubeless, especially on punishing single-day classics and monuments, such as the Paris-Roubaix. This has generated a surge in development with correspondingly wide rims, to create road bike wheel systems which roll with less resistance on imperfect road surfaces.

The superior aerodynamics of having that 25- or 28C tyres seated in harmony with a wide rim, negates the issue of a narrower rim being more aero.

For real-world riders, who hardly ever ride perfectly surfaced roads, the benefits of wider tyres are inarguable.