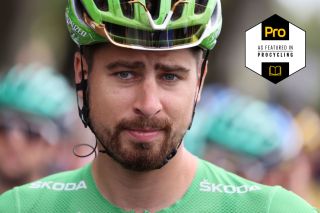 Peter Sagan’s relegation on stage 11 of the Tour de France, from the runner-up spot to last place, for shoulder-barging Wout Van Aert in the sprint, has suddenly made his prospects of retaining the green jersey for a record eighth time look very difficult.

For a brief moment, as Sagan hurled his bike forward over the line nudging himself ahead of rival Sam Bennett, he was back on the front foot; he’d closed the gap to the Irishman to just five points in the classification and crucially, scored a confidence-boosting victory over him.

But then the race jury reviewed the footage and disqualified Sagan. The 30 points he thought he’d won (10 more than Bennett initially in third), evaporated, as well as the 13 points he’d won earlier in the intermediate sprint (UCI rules stipulate the rider loses 25 per cent of the maximum points for winning the stage - which out of 50 was 12.5 points, rounded up to 13).

Bennett had started the day with a 21-point lead, and had added another 17 in the intermediate sprint, plus another 30 in the final. Sagan is stuck on 175 points while Bennett is streaking ahead on 243.

Before the start of the Tour, you’d struggle to find anyone who would have bet against Sagan winning green in Paris for the eighth time this year. Such is the three-time former world champion’s stranglehold on what was once considered the ‘sprinters’ jersey’, that you often get the impression that other riders haven’t even been trying all that much to challenge him for it, it’s become such an inevitability that he will win.

As Caleb Ewan, who finished runner-up to Sagan in green last year, explained prior to this year’s Tour, "The way the points work it's just not a competition that suits a pure sprinter. We haven't seen a pure sprinter win in years,” the Australian said.

Bennett started the Tour similarly coy on his chances of going for green, understandably making winning a debut stage his priority this year. But on stage 5, he stole the jersey from the three-time former world champion thanks to winning the intermediate sprint and finishing a place ahead of Sagan in the finale. Sagan, clearly not one to give it up without a fight, took it back on a rampage two days later on stage 7, throwing his whole Bora-Hansgrohe team into punishing Bennett on the climbs and in the wind, on the stage to Lavaur.

But while Bora did the crucial work to distance Bennett early as they wanted, Sagan wasn’t able to properly capitalise on it all after a mechanical scuppered his chances in the sprint for the stage win, where a bounty of points were on offer. Bennett should have been put to the sword – instead, when he won stage 10 he was able to take green back.

Stage 11 of the 2020 Tour was only the 30th day out of 163 Tour stages, over the last nine years, that Sagan hasn’t been wearing the green jersey.

Yet the Sagan of 2020 isn’t the same we’re used to seeing in years gone by. He last won a race on stage 5 of last year’s Tour (although the COVID-19 pandemic has obviously had a role to play in that). But still, that was one of just four victories in 2019 – down 50 per cent on his win tally from the year before. The impression he’s been giving over recent years is one of someone who's been feeling increasingly apathetic about the circus that follows him, too.

In fact, Sagan has never trailed another rider by a margin as wide as the 68 points he’s in arrears to Bennett now.

Bennett is clearly the faster of the duo, notwithstanding today’s final sprint. Sagan is not, and has never been, a sprinter in the same mould as the likes of Bennett, Ewan, Marcel Kittel, or Greipel. Sagan’s advantage in winning green has always been his climbing ability, and the fact he could get away up the road, on hilly or mountainous days, and execute a raid on the intermediate sprints that his rivals simply couldn’t follow.

But just like the Sagan of 2020 isn’t necessarily the same as before, the Tour in 2020 is not the same either. For the remaining stages of the race, the sprint primes come much much earlier in the day, and with much fewer metres uphill before them, than they have in years before. Six of the next eight stages feature intermediate sprints after less than 60km of racing, compared to just one in the comparative stages in last year’s route.

Four of those stages also feature no categorised climbs on the profiles before the sprint (stages 12, 15, 17 and 18) - although that’s not to say they’re entirely flat and without uncategorised hills that could still pose a challenge to sprinters. But only stage 13 this year features any climbs above category 3 ranking prior to the intermediate sprint – whereas three stages did so in the second half of the Tour in 2019. The territory for Sagan to execute an ambush just isn’t there.

Bennett has often proved he typically has the advantage on Sagan in a direct head-to-head, meaning it’s now the Deceuninck-Quick Step rider who is the favourite to take green in Paris. The only time Peter Sagan has not won green at the end of the Tour was when he was disqualified from the race in 2017. It seemed that for as long as Sagan started the Tour, green would always be his. Bennett now has as good a shot as a rider ever has before, and might ever again, at changing that. Just 10 stages stand in his way.

As part of our autumn sale a subscription to Procycling magazine currently costs £5 for the first five issues (UK offer only) – that's only £1 per issue.