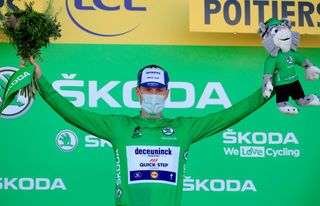 Sam Bennett’s hopes of following compatriot Sean Kelly’s wheeltracks to victory 42 years after the Tour de France's previous finish in Poiters could not become a reality on Wednesday, but the Irishman’s second place on stage 11 strengthened his hold considerably on the green jersey nonetheless.

Bennett was well placed in the closing kilometres and his teammates Kasper Asgreen and Bob Jungels did an excellent job of closing down a late attack by Lukas Pöstlberger (Bora-Hansgrohe).

“I don’t really know what happened, it was so hectic,” Bennett said afterwards.

“The team did a fantastic job all day looking after me. In the final, it was hard to make the switch from following a teammate to going alone and I found myself too far forward too early. Then I was trying to drift back but it was a bit late to drift back. Then they came at speed and, I don’t know, it was a complete mess. I tried to limit my losses and get the best result I could. “

He said it had not been part of the plan for his two teammates - Bob Jungels and Kasper Asgreen to go on the attack. Rather they had been chasing down Pöstlberger, as the Austrian tried for a repeat of his 2017 Giro d’Italia success  in Sardinia’s opening stage.

“I let the wheel go and I think Lotto let the wheel go and when they had the gap, they’re two big engines, so I was shouting on the radio to go, go, go. Because the chances of catching them, specially in that final would be so difficult. So like if they had a chance to win, fantastic,” Bennett reasoned.

“I was telling them they had a gap, even to get them to turn round and look so they’d realise the situation. But yeah, in the end it was a very hard final and they came back.”

He was almost scornful of the idea that Pöstlberger’s attack disrupted his sprint train. “No. We just a plan that if somebody went off the front then the other guys would follow. And actually it nearly helped us, they have a completely different idea to ours.

“We’ve been trying to bore our own way through in the last three kilometres so they’re just burning matches.”

Bennett was cautious when asked to pass judgement on the events involving  between Peter Sagan (Bora-hansgrohe) and Wout Van Aert (Jumbo-Visma) in the finale of stage 11,  saying he would have to see on TV first before making a definitive statement.

But he did point out that “A big part of sprinting is bumping shoulders and rubbing shoulders,” before adding, jokingly, "I really don’t know what happened but since when did sprinting get soft?”

In any case, he was doubtful, too, about whether Sagan, now nearly 75 points behind him on the green points jersey would be more vulnerable in that particular ranking. “I feel like Sagan is getting stronger,” he warned.

That said, after winning the race’s one intermediate sprint behind lone breakaway Matthieu Ladagnous (Groupama-FDJ), Bennett’s hold on green appears very secure at least in the mid-term.  And so if winning in Poitiers proved impossible, he could  be following Sean Kelly’s wheeltracks in this year’s race in other ways yet.