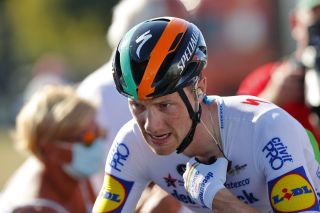 After years of battling against injuries, illness and non-selection for the Tour de France, it was perhaps only logical that Sam Bennett took his time coming around to the idea that he has finally nailed the first win of his career in the biggest bike race on the planet on Tuesday.

Even in this year's Tour, where he's clearly on top of his game, the Deceuninck-QuickStep racer had already hit the post three times, taking fourth, second and third in previous stages, before he powered across the finish line at Île de Ré ahead of Caleb Ewan (Lotto-Soudal) and Peter Sagan (Bora-Hansgrohe).

As it happened, the Irish National champion and his Deceuninck-QuickStep team barely put a foot wrong en route to their second stage victory of the 2020 Tour de France, which also enabled Bennett to recapture the green jersey ahead of his former teammate Sagan and complete his 'set' of Grand Tour wins.

But as the 29-year-old recounted afterwards, the combination of relief at the end of what has been a long wait and the lifting of the pressure from his shoulders made it hard, initially, for his achievement to sink in.

Sam Bennett: I gave the other guys another lead out

"It was really weird because the team seemed to go too perfectly," Bennett told reporters afterwards as he recounted the final moments of the stage and his feelings afterwards.

"I was almost in shock, it just didn't hit me, so many great sprinters have gone through this team and delivered, so I really wanted to deliver for them."

The top fast men who have preceded Bennett in Deceuninck-QuickStep include Marcel Kittel, Mark Cavendish, Fernando Gaviria and most recently of all, Elia Viviani. Expectations could not have been higher but Bennett more than proved to be up to the task at the end of what was a singularly fraught, crash-ridden day.

Although he was adamant that "everybody in the team" had played a role in his success and made a point of thanking them all, Bennett was asked specifically about Michael Mørkøv and his lead-out into the headwind that was whistling down the finishing straight - and he praised the Dane to the heights.

"He was so calm, it was super-smooth and it went so perfect I almost couldn't believe it was happening. I saw 200 metres to go, I was in first place, and there was no other lead-out train coming. I took a run at his wheel because I knew it was a headwind."

As for whether Caleb Ewan could have staged a last-ditch comeback past him at the line, Bennett said he had "not thought about it. There was a moment when I should have thrown my bike harder at the finish line because it's too big a race to make a mistake, but I also wanted to celebrate the win.

"Close to the line I felt I had the power, but a couple of kilometres before my legs were dead - my team had worked really hard to protect me, but even if you are protected, you always take on a little bit of wind here and there. So there's always the chance to lose, but in that moment, you just have to go."

Bunch sprints at the Tour de France, the green jersey and his nationality all make comparisons with Sean Kelly inevitable, but in Bennett's case, coming from Carrick-on-Suir, that's doubly or triply the case.

Bennett recognised he was enjoying massive home support back in his and Kelly's hometown during this year's Tour de France before outlining his pride at representing Ireland in the national champion's jersey. But he warned that just because he was now leading in the points classification, it was far from certain he would be heading home with green in his suitcase like his fellow-countryman did four times. "Peter [Sagan] has won it so many times for a reason," he pointed out.

There was a moment of genuine dithering when asked if he would prefer to be standing in green on the Champs-Élysées or celebrating having won the last stage of the Tour de France in a little under two weeks.

"I have no idea, I always say my three dream wins are San Remo, the World Championships and the Champs-Élysées," Bennett said. "But I never thought about green until I was wearing it and maybe I'd take that…" after which there was a pause, a broad grin and some laughter followed by a heartfelt, "Jesus, I don't know. I'll take whatever I take."

But come what may in Paris, what Bennett achieved at Île de Ré remains a landmark of major proportions in his career and the closing of one overly drawn-out chapter. As for the opening of the next and what it could hold, the Tour's next stage finish is in Poitiers – where Kelly won in 1978 – and hopes will be high for a repeat Irish victory tomorrow.