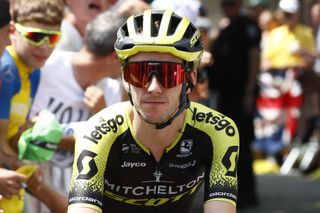 Simon Yates' southern hemisphere adventure was in danger of being over as early as his second day of racing in Australia when he injured his knee in a crash on stage 2 of the Tour Down Under last month. However, the British climber rallied to finish the race, and then took part in the Race Torquay and the Cadel Evans Great Ocean Road Race last weekend, and is now at the Herald Sun Tour, where he's the big favourite to take the overall title on Sunday.

Not only did Yates finish the Tour Down Under, but he also took third place on the stage the day after his crash and finished seventh overall in Adelaide, before taking 10th place at the one-day Cadel race in Geelong.

Talking to Cyclingnews ahead of stage 1 of the Herald Sun Tour on Wednesday, which started at the Mitchelton Winery Estate – the headquarters of his team's main sponsor – he said that his knee was holding out and that he hoped to be able to continue racing without any problems, but without admitting that he was the out-and-out favourite, despite being the only Grand Tour winner on the start line of the UCI 2.1-category race.

"My knee's been all right," the 2018 Vuelta a España champion told Cyclingnews. "It was just that first day after the crash that I had a bit of a problem but I came good in the final there, though, so it was all good, really, and I've not had any problems with it so far.

"It's been very close to needing stitches," he added, "but if I need stitches, then I'll stop racing. I prefer just to race while I'm here, and then look at it."

At a race where domestic Australian teams rub shoulders with WorldTour riders from some of the best teams in the world, Yates stands out as the headliner at this year's Herald Sun Tour, and on paper should be collecting the winner's trophy in Melbourne's Botanical Gardens come Sunday afternoon.

'On paper' doesn't always cut it in bike racing, however, which Yates is only too aware of, and these early season races in Australia are as much about easing into form for a long season as they are about winning.

That said, Thursday's 30km-long climb up to the summit finish of the Falls Creek ski resort for stage 2, and Saturday's 15km finishing climb to the Mount Buller resort on the race's penultimate stage, offer Yates and his Mitchelton-Scott teammates the perfect opportunity to showcase what they're capable of in their Australian sponsors' backyard.

"I know both climbs from doing a training camp here in 2014," explained Yates, recalling the year that he joined the team, "but I've not done them since then, so it's a long time ago. But they're long climbs, hard climbs, and I think the second one – Buller – is harder, but we don't know how things will go until we get there."

Asked about who his principal rivals were likely to be, Yates refused to be drawn.

"We're just trying to do our own race," he smiled, "and we'll see from there."

The riders most likely to put him in any kind of difficulty on those two race-deciding climbs include Sunweb duo Rob Power and Jai Hindley, EF Pro Cycling pair Neilson Powless and James Whelan, and potentially Israel Start-Up Nation's James Piccoli, who won last year's Tour of the Gila and finished as runner-up at the Tour of Utah, but is in only his second month of racing for a WorldTour team having joined the Israeli squad from US domestic team Elevate-KHS.

Thursday will provide the first big test; Saturday should provide the winner of this year's Herald Sun Tour.

'If I see an opportunity, I try to take it'

Yates has two major targets for this season, and just two days before his crash at the Tour Down Under, he sat down with Cyclingnews at the Hilton hotel in Adelaide to discuss his goals.

That his season wasn't derailed early will have given him confidence that he remains on track for another tilt at overall victory at the Giro d'Italia and for the opportunity to represent Great Britain on what is a hilly course for the Olympic road race in Tokyo, Japan, in July.

It means that he'll likely miss this year's Tour de France, although last year he went to the Tour in order to ride in the service of his twin brother, Adam – for whom the race didn't go as hoped – and came away with two stage wins of his own.

Yates comes across as an out-and-out racer, unshackled by expectation or pressure, and more of an opportunist who's as happy going for a win at a smaller race as he is trying to take the overall victory at a Grand Tour.

"They were just opportunities, so I tried to take them," he said of those victories at last year's Tour. "I didn't feel free or anything because I wasn't riding for the GC; I just felt like, 'OK, this is my chance, and I'll try my best,' and if it didn't work out, then it was what it was."

He went into this year's Tour Down Under alongside his Mitchelton teammate and the defending champion Daryl Impey, declaring himself ready to ride for Impey to try to help the South African veteran take a third successive victory, but also ready to race on the two days of the race that ended with uphill finishes – finish climbs that prompted Mitchelton-Scott's head sports director Matt White to call this year's Tour Down Under the toughest edition he'd seen in 22 years, i.e. since its inception in 1999.

"I'm always quite happy to work for others," said Yates. "Daryl Impey helps me all year; he works for me all the time, with positioning or whatever, and so I'm very happy to help him whenever I can, or anybody else who wants to have a go at a race.

"I'm not one of these leaders for who it's all for me; I'm just happy to race. I enjoy racing, and if that means getting stuck in to help someone else, then I'm happy to do that. And it just comes back to what we were saying before: it's only really if a chance presents itself to me that I'll try to take it," he said.

In a Mitchelton-Scott squad built increasingly around Simon and Adam Yates – the team let sprinter Caleb Ewan leave for Lotto Soudal at the end of the 2018 season, and this year said good-bye to one-day Classics specialist Matteo Trentin – Yates insists that there are still opportunities for everyone.

"You saw that at the Tour last year, when we went looking for the GC [for Adam] but still came out with four stage wins," he said, which included two for him and one each for Impey and Trentin. "We're still quite a diverse team. We can still change pretty easily; we're pretty fluid like that.

"On the pressure side of things, it's not really how we're set up as a team," he said of Mitchelton's nevertheless lofty Grand-Tour goals. "A lot of the pressure comes from me, on myself. I really try to do things the best I can, and to be really focused – whether that's training or racing. So that kind of takes care of itself, really. We have a job to do in that the team wants to win races, and I want to win races, and you can see how passionate Matt White is about it. But it's not do-or-die pressure.

"This year, I'd really like to win the Olympic road race," admitted Yates. "Growing up, that was what I dreamed about. So for this year, my goals will be the Giro and the Olympics – those will be really what I concentrate on."

"Yeah – I think I'd really like to complete the 'Grand Tour set'," he laughed, following a little prompting.

After 13 days in the pink jersey as leader of the 2018 Giro d'Italia, his race fell apart on stage 19 on the road to Bardonecchia when Team Sky's Chris Froome went on what turned out to be a winning raid over the gravel climb of the Colle delle Finestre, while Yates lost almost 39 minutes, and plummeted to 18th overall.

However, Yates recovered and went on to that year's Vuelta a España, where he dominated in the same way that he had for so much of the Giro four months before, and came away with a 1:46 victory over Enric Mas, then with QuickStep, with Miguel Angel Lopez (Astana) in third place, a further 18 seconds back.

Yates has won the Vuelta, he knows he's capable of winning the Giro, and the Tour could also go his way in the future.

"It would still be a very tough task – let's put it that way," said Yates. "The three Grand Tours are all very different races, but for me it doesn't really make a big difference. They're still long, three-week races, and so I'll just go to this year's Giro having worked hard, and in good shape, and take it from there.

"There's not really much else you can do, other than try to avoid some bad luck, or punctures or crashes, or whatever. There's not much else to it, really," he smiled.