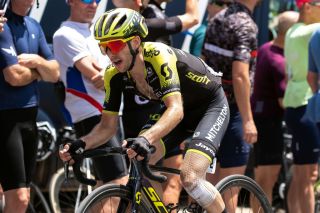 Simon Yates (Mitchelton-Scott) rode strongly at the 2020 Tour Down Under, despite injuring his knee in a crash (Image credit: Getty Images Sport)

The 2020 Jayco Herald Sun Tour makes a return to the real mountains, featuring the iconic Victorian climbs of Mount Buller and Falls Creek – both of which have featured in Australia's oldest stage race before, but which will this week feature together in the same edition for the first time in the event's 68-year history.

In 2019, the expected overall battle between climbers Michael Woods (EF Pro Cycling) and Trek-Segafredo's Richie Porte faded away on the penultimate stage, although stage 2 from Wonthaggi to Churchill did see the two riders battle it out for stage honours on a course that included the gravel climb – and descent – of Jeeralang, where Woods took the stage win and the leader's jersey.

A tougher route last year might have suited Woods and Porte better, but in the end it was Team Sky's Dylan van Baarle who triumphed, having matched Mitchelton-Scott youngster Nick Schultz on the 'queen stage' to Arthur's Seat, with the climb tackled four times on the penultimate day of the race.

Schultz took the stage victory, but Van Baarle took control of the yellow leader's jersey, wresting it from Woods' shoulders after neither he, nor Porte, were willing, and perhaps not able after both losing their teammates early on the stage, to chase the winning breakaway in which Schultz and Van Baarle featured.

Both the opening stage from Nagambie to Shepparton on Wednesday and the final stage around Melbourne's Royal Botanic Gardens on Sunday should go the way of the sprinters, with the local Continental Australian squads' riders getting their opportunity to mix it with the likes of WorldTour sprinters Moreno Hofland (EF Pro Cycling) and Mihkel Räim (Israel Start-Up Nation).

Expect the likes of Mitchelton-Scott's Simon Yates, Sunweb's Rob Power and James Piccoli (Israel Start-Up Nation) to show themselves early, but the WorldTour teams may prefer not to take the lead quite so soon in the race; Mount Buller, on stage 4, will decide the race, and protecting a lead from then and into the final stage in central Melbourne on stage 5 shouldn't prove too difficult for the world's best, which Team Sky proved last year when it came to retaining Van Baarle's overall lead.

Mount Buller may not be as long a climb as Falls Creek, but 15km is still long enough at this early point of the season, and Buller – last used in the 2008 race – has steeper sections, too, touching 13 per cent in places.

The Falls Creek finish on stage 2 should give us plenty of clues as to who's likely to feature at the summit finish on stage 4 on Saturday, but whoever wins at the top of Mount Buller on that penultimate stage could well be the 2020 champion.

"It's fantastic to have two of Victoria's most iconic mountains in the same race. Buller used to be in the race almost religiously, but it's been a while since we've been back there," said race director Scott McGrory.

"It will be a race won by a pure climber, but there are plenty of opportunities for the other riders, that's for sure," he said.

Along the way, stage 3 from Bright to Wangaratta could be one of those opportunities – an undulating day coming after the stage to Falls Creek, and while the overall contenders will be attempting to save their legs for Mount Buller on stage 4, they'll need to keep their wits about them on a day that could well be won from a breakaway.

On paper, and given the nature of the course, you might expect 2018 Vuelta a España winner Simon Yates to come out on top at this year's Herald Sun Tour.

However, Yates crashed on stage 2 of the Tour Down Under last month, and while he pushed through the pain of his knee injury to ensure that his Australian racing trip wasn't ended prematurely – and in fact, he rode to seventh place overall at the TDU, before taking 10th at the Cadel Evans Great Ocean Road Race at the weekend – the British climber may not be in as flying form as he otherwise might have been.

"Of course, we're in the middle of the Aussie summer and so the local teams are in great shape and very motivated," he said on his team's website. "It will be a hard race, and not knowing the opposition always puts a question mark in your mind before trying anything in the race, but I'm looking forward to racing nonetheless."

If Yates proves unable to mount a bid for the overall title, then his Mitchelton-Scott teammate and last year's runner-up, Nick Schultz, should be ready to step up. The team also packs firepower and experience in 2017 Sun Tour winner Damien Howson and recently crowned Australian road race champion Cameron Meyer, who also won the Sun Tour back in 2015.

Israel Start-Up Nation's James Piccoli is still only a month into his first season at WorldTour level, but he's likely to have the support of the entire squad for the two key climbing days, on stage 2 and stage 4. The 28-year-old Canadian's overall victory at the Tour of the Gila and second place overall at the Tour of Utah last season proved that he has what it takes in mountainous one-week stage races.

Bringing arguably the most well-rounded squad is Team Sunweb, who boast Michael Storer, Jai Hindley and the in-form Rob Power for their climbing and GC goals, while their strong sprint unit is made up of Asbjørn Kragh Andersen, Alberto Dainese and Max Kanter.

Whoever comes out on top on Sunday, February 9, will have earned it; the riders face arguably the toughest Herald Sun Tour route for years