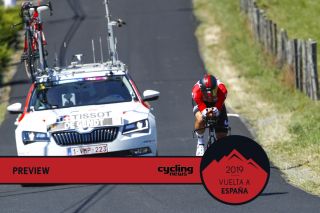 Roglic can take control of Vuelta a España in Pau TT but can he go the distance?

The Vuelta a España’s one individual time trial on Tuesday afternoon could see major gaps open up between the top four favourites for overall victory, but the course will be anything but a straightforward path to victory.

Much of the 36.2km route between Jurançon and Pau is on hilly, twisting, narrow country lanes with a couple of very technical descents. As such, it could prove tricky for riders to find a steady rhythm.

In recent years, the Vuelta organisers have tended to opt for fairly broad, open ‘A' roads for their time trial routes – like the one that finished in Óscar Freire’s hometown Torrelavega last year or the one that started on a speed-racing circuit in Navarre in 2017 – where gifted TT specialists like Rohan Dennis, the 2018 winner of the equivalent stage, could fully exploit their potential.

This year’s time trial route, though, looks set to be a much more complicated kind of game, particularly in comparison to the Tour de France time trial this July in the same area of south western France.

The first part of the Vuelta’s TT route, after a brief urban segment through the town of Jurançon, close to Pau, consists of two kilometres of grinding uphill with a couple of big hairpins, where the climbers should be able to give the TT specialists a good run for their money.

The second segment, between the third and 15th kilometre, is an undulating treelined ridge road on narrow lanes little more than a tractor’s width, running past vineyards, large country estates, and plenty of signs - in French - to remind the local population that 'ici passe la Vuelta' - the Vuelta is coming through here.

Road surfaces are middling to poor, too, and although they should mostly have dried out by this afternoon, patches of damp could create the occasional hazard.

The biggest challenge, though, will be finding a balance between overdoing it on the few straight sections and taking it too cautiously on the high number of tricky, poorly cambered corners that feature in between.

A very fast descent and much steadier uphill to the village of Saint Faust (21km into the stage) takes the riders into a slightly more straightforward section of country roads. Just after the village, though, there’s another very difficult descent, with two complicated corners forcing a big drop in pace.

The last part of the course, around five kilometres running back into Pau, is the most straightforward, on broader, well-surfaced A roads and city streets where the specialists will be able fully to open the throttle.

With so many different segments, working out how best to gauge an effort could prove to be an unusually fiddly kind of mental jigsaw.

Given the technical nature of the TT course and the proliferation of undulating rural backroads, the weather, fortunately, is set to be good, dry and warm all afternoon.

On such a narrow route, though, it could be difficult for team vehicles to stop and give assistance to riders with mechanicals or punctures without blocking the road for those riders following immediately behind.

With two time trial victories in the Giro d’Italia this year and a third in 2016, TT victories in WorldTour races like the Tour de Romandie and Vuelta al País Vasco, as well as a National Championships win in 2016 and a silver medal in the Worlds TT in 2017, Primož Roglič (Jumbo-Visma) is the clear pre-stage favourite.

However, on a course as challenging and fiddly as this, anybody wanting to win this afternoon’s time trial, regardless of their palmarès, will have their work cut out.