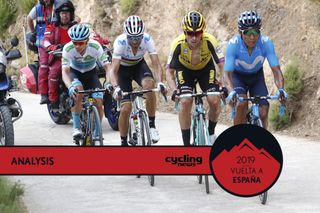 This year’s Vuelta a España has been so eventful it’s hard to believe it was only 10 days ago that Primoz Roglic (Jumbo-Visma) threw down the gauntlet prior to the race and announced he was here to win the title outright.

Forthright declarations of intent are very unusual so early in the Vuelta. Aside from being a very hard race to manage in terms of terrain – this year there have been four major mountain stages in the first week alone – come the second half of the season, even the sport’s top names often tend to be uncertain of their race condition.

Roglic, however, said he was here to win the Vuelta, and as the race reaches its first rest day, he looks like the rider most likely to do it, too.

The Slovenian is second overall, just six seconds back on Nairo Quintana (Movistar), who has resigned himself to losing the red leader’s jersey in Tuesday’s 36-kilometre time trial in Pau. Miguel Angel Lopez (Astana) at 17 seconds, and Alejandro Valverde (Movistar) at 20 seconds, are the two men directly behind Roglic, meanwhile, and neither is anywhere near as good when it comes to time trialling.

Indeed, when Lopez was asked before the Giro d’Italia how much time he expected to lose in 60 kilometres to Roglic, he said he hoped it would be around two minutes. As it turned out, Lopez lost 3:45 to Roglic in the San Marino time trial alone. Here, with 38 kilometres of time trialling, it would seem reasonable to expect him to be happy with losing about two thirds of that - around 1:30 or so. But if the Giro is anything to go by, it could be a lot more.

Outside these four favourites, Tadej Pogacar (UAE Team Emirates) is the only outsider likely to make an impact on the GC battle. Just 1:42 back, a searing time trial performance is by no means out of the question, as he demonstrated at the Volta ao Algarve in February, and it could put him in the fight for the podium. It is not the Slovenian’s only chance to regain ground, as he showed in Andorra on Sunday, but it could be one of his best.

Denying Roglic the red jersey on Tuesday seems impossible, however. In the longer term, Pogacar’s chances of making it through three weeks of racing in the top five are by no means non-existent, but it remains to be seen if, at just 20 years of age and in his debut Grand Tour, he has the ability to handle such a tough and long endurance test.

That, also, is perhaps the one mild question mark that lingers over Roglic, given that, with just four Grand Tours in his career to date, he is still something of an unknown quantity in three-week events.

It’s true that Roglic had an amazing third week - barring the final time trial - in the 2018 Tour de France, but in the Giro d’Italia this year he lost time constantly throughout the third week after illness and his bike-swap-and-crash incident on the Civiglio left him on the back foot.

Quintana, Valverde and Lopez – although the latter has been an erratic performer himself in Grand Tours – have all proved they can go the distance more than once. While Roglic has placed third at this year’s Giro and fourth at last year’s Tour, Lopez has two Grand Tour podium finishes to his name, and both Quintana and Valverde have had repeated success in that area.

The climbers know they will lose time to Roglic on Tuesday. The question is how much, and then how easy it will be to regain the lost ground in the mountain stages to come.