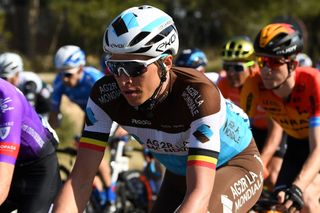 Having recently signed a contract extension at AG2R La Mondiale, one might assume that the pressure has lifted off Oliver Naesen's shoulders but, as he tells Cyclingnews, he is making sure that his mind and body are ready to go when racing resumes on August 1.

The Belgian Classics specialists talks about his time in lockdown, the new-look race calendar and why he decided to stick with the French WorldTour team.

Cyclingnews: Belgium had a softer approach to lockdown than several other countries. How do you see that affecting racing if and when competition resumes in August?

Oliver Naesen: We had a lockdown in Belgium but it hasn’t been as strict as in other countries. The government has allowed us to be outside riding our bikes, and as cyclists, we didn’t really have that much to complain about. It’s been business as usual for us, except at weekends when there was no racing. I’m sure that we might have a slight psychological advantage from having been allowed outside a lot sooner than others. If you’re in your house for two to three months, and you’re only allowed to ride the home trainer then it’s tough. In Belgium we didn’t have to go through that, so mentally I think that that’s a big advantage.

CN: Have the last few months felt like an extended off-season?

ON: The only difference is that if this was November we would be riding for 100 to 150 kilometers and we’d get home feeling wrecked. However, in this situation, everyone was in shape when the lockdown started and we’re able to still do these big rides. There’s no real pressure so it’s just about riding and having fun. You feel good, you go fast, and it’s actually pretty nice.

The Power List: The 50 most influential people in cycling

CN: How is your race schedule shaping up?

ON: Well, even now, things are changing from day to day. The programme cannot be 100 per cent right now but as things stand I think that I’m going to come back with Route du Sud in the South of France. I’ll prepare for Milan-San Remo but the date for that race isn’t 100 per cent certain. It’ll then be the Tour de France for me, before racing the rest of the Classics.

I think I’ve been given the best and most do-able programme because there are no overlaps and because there’s a bit of recovery between each race. You can keep your shape high at that point without being super tired. If I look around, I think that I’ve got one of the easiest programmes to do from all of the other possibilities. If you’re doing the Tour and the Vuelta, then it’s a totally different story.

CN: Considering how condensed the newly formatted season will be, and taking into account the long break since the last set of races, what do you think will be the keys to capitalizing on the post-COVID-19 lockdown race schedule?

ON: There are multiple possible keys, to be honest. Confidence is one. A lot of riders stop their seasons early, a lot of big riders anyway, so for them, it will be something new if they are going to keep on racing into October. For me, I’m always pretty good at the end of the year, so in my head I’m looking forward to racing late. That’s not the same for everyone.

Also, something you have to keep in mind is not to overcook yourself. It’s always tempting when you feel good and the weather is nice to go out to train too hard and come into shape too early. You need to keep your head fresh too. Lastly, a race like the Tour of Flanders won’t feel the same as a Tour of Flanders in April but you need to take the same level of seriousness with your approach. You can’t look at it as a small wannabe Tour of Flanders because it’s still the real thing. The danger, especially at this time, is that you underestimate the races when they come back.

CN: So how do you mentally prepare for the resumption of racing?

ON: Training has been about maintenance for now, with some endurance and a bit of everything. I’ve been making sure that I’ve been keeping my head fresh by just taking it easy. I’ve done some mountain biking during this time but I think that it’s been important to be convinced that the race programme in front of us is going to happen and that it’s our plan A. If you start to have doubts and start to think that there will not be any races this year, and the Tour might be cancelled, it can harm your outlook. You’ve got to convince yourself that racing will return because that’s what will keep the fire burning. We still have almost two months until racing, and that’s a huge period of training. If you look at it like that if feels unreasonable, so you chop those bits into smaller blocks and that’s what gets you through the period.

CN: Let's assume that racing goes ahead and that we're able to stick to the UCI's new-look calendar. It's going to be intense, with races overlapping and a major event – some times multiple events – taking place on the same weekend.

ON: It’s going to be huge. For cycling fans, it’s going to be unbelievable and for us the riders the pressure is going to be on all the time. We’re all going to have to hang on for dear life on the rollercoaster that is 2020.

CN: Does it take the pressure off somewhat in the sense that your future is secure and you signed a new deal at AG2R La Mondiale?

ON: Not really. It’s not nice to have to answer questions about contract talks and I read the articles about riders – big and small – being out of contract for next year, with some competing for their places and others competing for their salaries. It’s nice not to have to deal with that but I don’t think that there would have been many scenarios in which I didn't find a team for next year. But the plan from last year was to always sign a contract, wherever it might be, between the Classics and the Tour de France this year.  Since the Classics didn’t happen in the spring, I said to my agent that we should get it done before the Tour. AG2R wanted to get things done as soon as possible because they wanted to ensure that they had leaders in the team. They want to remain competitive. Nothing was going to really change between March and the start of racing.

CN: You've explained it briefly in your press release but why did you choose to stick wit AG2R? I'm sure that there was interest from other teams?

ON: I had some interest from other teams stretching back to last year’s Tour de France, when my agent started getting calls. But first of all, my goal was to stay with the team. They discovered me. I’m happy here and they gave me a chance when my old team, IAM, stopped. There weren’t many places that I could go at the time but after three pretty nice seasons, I could go to several teams. But after we started talking to teams that were interested I immediately saw that AG2R wanted to keep me.

Whenever I talked to the boss he would tell me that he wanted me to stay and that I meant a lot to the team. It feels like a family and I think that I’m the kind of guy who would be happy in most WorldTour teams, but why change when you’re happy? Then when I was talking to other teams, with the pandemic in the background, some weren’t sure if they were going to exist next year and some didn’t know their budget for 2021 and wanted to wait half a year. Then there was our team that was solid and stable. Stability was really important.

CN: You mention support, are the team also looking to bring in support to help you in the Classics?

ON: We’ve talked about this and two riders are coming in who will help support us in the Classics. From what I understand they are talking to more really strong riders. I can’t say who is coming because I don’t think that those riders have told their current teams yet but AG2R has promised me some reinforcements. They’re in the final stages of discussions.