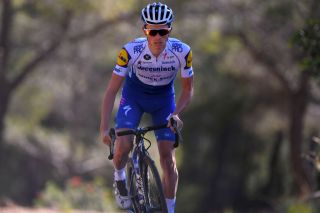 "It's not often you're in that situation," James Knox says, and then corrects himself. "Actually, I don't think I'll ever be in a situation where just 30 guys are 100 per cent committed to riding full gas with 200k to go. World-class riders were exploding out the back in the crosswinds and we just kept our foot down all day."

The situation in question is stage 17 of last year's Vuelta a España, where the peloton was rent asunder by crosswinds in the opening kilometres and Knox found himself in the elite echelon that stayed clear all the way to the finish in Guadalajara.

It was hardly the kind of scenario that would have appealed to the Briton in his amateur days but, in some respects, it was a microcosm of the apprenticeship he has served in his first two years at Deceuninck-QuickStep.

As an under-23 rider, Knox defined himself purely as a climber and saw his power-to-weight ratio as his ticket to the professional ranks. "That was going to be my way in," he tells Cyclingnews.

His aptitude as a climber has served him well in the WorldTour – witness his 4th place atop La Cubilla on stage 16 of that Vuelta – but at this level, the most important quality is the ability to turn up to work, day after day, especially when the terrain is unkind.

"As a climber, I'm probably not a huge amount better than I was as an amateur: I could go out and do the same climb full gas that I did in 2016, it would potentially be worse," he says. "But the repeatability and doing it after six days of hard racing, that's where you see the actual improvement. You have to be just overall fitter, stronger and more durable."

Knox demonstrated as much on that breathless afternoon in Castile. It was the first time he had raced so deep into a Grand Tour – he was forced to abandon the Giro d'Italia on stage 13 through injury – yet he quickly fell into step when his teammates helped to splinter the race into echelons in the opening kilometres.

Maillot rojo Primoz Roglic and world champion Alejandro Valverde would be more than five minutes down by the finish, where Knox's companion Philippe Gilbert helped himself to stage victory. Knox himself came home in 10th place on that stage, which sufficed to lift him up to 8th place overall.

"I guess I was really shit scared before the start of the stage. Before it, I had crept up to a top 15 on GC and I was hoping I could defend that, but I could see the risk of what might happen on that stage," Knox says. "Maybe I felt more alert to it than some guys because it's not my strong point. I had to be in a good position because if I wasn't, there was no way I was going to be crossing groups or anything.

"It was just pure survival for me in the last 40k, I was seeing stars, just hanging in the wheels and ripping along at 70kph in that tailwind. I think I crossed the line pretty delirious. I couldn't believe what had happened and then the way it finished as well. The whole thing was just pure euphoria. I'll never forget it."

Knox was full value for his place in the top 10 on the Vuelta, climbing strongly in Asturias after a difficult opening week, and sniffing out opportunities to pick up swathes of time in breakaways along the way. All that graft was snagged by a heavy crash on stage 19 to Toledo, however, and though Knox managed to continue in the race despite his injuries, his resistance would inevitably fray on the final mountain leg to Plataforma de Gredos. He would concede over 11 minutes and drop to 11th place overall.

In the moment, Knox was relieved – euphoric even – simply to survive the day and make it to Madrid. At a remove of four months, he quietly rues missing out on a top 10 finish, if only because it would have been a striking line in his resumé. The narrow margins between 10th and 11th overall in a Grand Tour can widen considerably in contract negotiations, but in the final reckoning, a cyclist does not measure his experiences in dollars and cents.

"At the time, I wasn't disappointed, even if it nibbles away a little bit now," Knox says.

"The guys had a bit of a joke with me about not getting the top 10, but on that stage 20, it felt like I'd won the race just finishing it. I crossed the line and felt like that was everything. I was so relieved and so overwhelmed about the whole race. It was the same feeling the next day in Madrid. The relief and overwhelming joy of finishing the race. The feeling of finishing a Grand Tour felt more rewarding than the position."

By the time Vuelta came about, Knox's progress as a professional had already been rewarded by a two-year contract extension with Deceuninck-QuickStep. It was a hefty vote of confidence. For all the bonhomie of the self-styled 'Wolfpack', riders aren't handed contracts simply on the basis of their amiability.

"It was nice joining the team and knowing there was going to be no bullshit, I was going to have to prove myself as a rider and do my job," Knox says. "I wasn't going to sneak my way through by kissing the right arse or saying this or that. It was going to be a matter of being professional and performing."

Over his first 18 months with the team, Knox had demonstrated his ability to put in the required shift time and again, and a glance at his sequence of results in 2019 campaign offers proof of his consistency: 8th at the UAE Tour, 3rd at Adriatica Ionica Race and 10th at the Tour de Pologne. The one dissatisfaction, perhaps, is that he is still awaiting his first professional victory, but he can take solace from how swiftly he lifted himself after the first major setback of his career, when he was forced out of the Giro.

Rather than dwell on that misfortune, Knox availed of the opportunity to take a rare mid-season break. Temporarily loosening the restrictions of the professional life ultimately helped him to recalibrate for the remainder of the campaign.

"It sounds stupid, but I've never been able to go on holiday, so it was a chance to enjoy something else because you get so wrapped up in racing," Knox says. "I don't think I watched the last 10 days of the Giro; I was just on holiday instead. I had two or three weeks off and then I focused on trying to have a good second half of the season. I had motivation."

Knox's calm build-up to the Vuelta and his almost nonchalant approach to targeting GC – "I asked the team before the race if I'd be alright to have a little crack at GC, it was amusing how relaxed it was," he says – felt eons removed from the pressure cooker he often created for himself as an amateur. Although Knox had signalled his potential by the time he swapped the Zappi squad for Wiggins in 2016, he convinced himself that his contemporaries possessed greater talent and so compelled himself to compensate with a devotion to his craft that skirted with obsession.

"I never felt like I had what it took to be a professional, and I was around guys who were better than me, had more talent than me or whatever, so I really put a lot work into it," Knox says.

"I put a huge amount of pressure on myself. As much as it's a dream, you also realise how much time, effort and money you've invested, as well as your family and everybody else around you. You really want to make it. I took some things too far. I over-trained a couple of times and paid for it in the second part of the season. I got myself too skinny and got ill because of things like that."

Counter-intuitive though it may seem, life as a professional has been, at least in some respects, less onerous. Where an eager espoir feels obligated to prove his worth in every race from February to October, the professional accepts that he cannot conquer the world every time he sits on his bike. At WorldTour level, a rider is encouraged to choose his battles carefully and prepare accordingly.

"There isn't the same stress to be really 100 per cent all the time," he says. "I could take each race and progress slowly. I had two years and I realised I had time. The team gives you that mentality as well; you do your job, and as long as you've got the right attitude, then everything comes with that, instead of chasing it."

Knox will follow a familiar racing schedule in 2020, with his year once again broken neatly into two distinct parts. "I feel like you get the most of your season that way," he says.

He will start his year at the Volta a la Comunitat Valenciana in February, before building towards the Giro, where he will line up alongside Remco Evenepoel and Fabio Jakobsen in a youthful Deceuninck-QuickStep selection. After a short break, Knox will turn his attention towards preparing for the Vuelta.

"Hopefully I can do a good GC on the Giro or get up there on stages, but I don't think in many ways it suits me having long days and a back-heavy race with super hard long mountain stages," he says. "I kind of enjoy the explosive nature of the Vuelta with shorter days and punchy climbs. It didn't quite feel as much of a drag."

Deceuninck-QuickStep's Classics emphasis – Julian Alaphilippe's remarkable 2019 Tour de France notwithstanding – means that a climber like Knox enjoys greater freedom than he would do on a team of equivalent size, even if he is reluctant to tether himself to specific GC goals for the time being. The 2019 Vuelta might even, he suggests, be as good as it gets, even if, at 24 years of age, he has ample margin for improvement.

"Being honest, sat here right now, the reality is that I might not experience success like that again in a Grand Tour. I don't know how long I'll be a pro, that could be it," Knox says. "That could be my own best performance and it could also be the most enjoyable one to be a part of."

Then again, when Knox was still a teenager and trying to make his way with Italo-British outfit Zappi, he reminded himself to drink in the experience of racing in places like Italy and Portugal, mindful that it could be a once-off.

"Riding in Europe felt sort of magical - that was the dream," he says. "I didn't think I'd necessarily become a professional, but I just got to experience that little sliver of it."

He has experienced plenty more since.