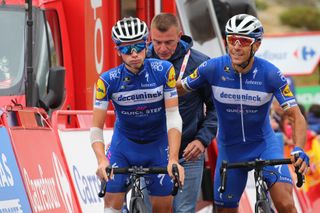 James Knox reached the finish line of stage 20 of the Vuelta a España in a state of near-complete exhaustion. Heavily bandaged after a crash 24 hours previously, the British youngster slipped out of the top 10 of the overall standings at the last minute, but his race had become a battle just to finish.

The 23-year-old, riding his second Grand Tour after the Giro d’Italia earlier in the year, had climbed to 10th overall during the second week, thanks to a breakaway in the mountains and a strong ride in the crosswinds. However, he came down in the big crash that occurred 65km from the finish on stage 19 and was heavily banged up.

Stage 20 started out in ferocious fashion, as Astana looked to put pressure on their GC rivals, and Knox was soon feeling the effects. After just about staying in contact on the first of six climbs in the Sierra de Gredos, he started to drift on the second, the second-category Puerto de Serranillos, with around 150km still to ride.

He was able to get himself back in on the descent, and then follow when the race settled down towards the half-way mark. However, Astana lit the race up again on the third-category Puerto de Chia with 70km to go and Knox was more definitively dropped.

He went on to finish 36th on the stage, more than 11 minutes down on the stage winner. As such, having started the day with an eight-minute buffer in 10th, he was overtaken by Marc Soler (Movistar) and Mikel Nieve (Mitchelton-Scott), who both finished in and around the red jersey group.

Despite losing his top 10 spot, Knox could take heart from the way his more experienced teammates rallied around him on the stage. His roommate Philippe Gilbert and Zdenek Stybar stuck with him throughout the day and helped him towards the finish.

Cameras captured the moment Gilbert, a former world champion and winner of four Monuments, encouraged him to remove his gilet, before taking it from him and carrying it in his own jersey.

"I can’t really put into words what it means to have Philippe and Zdenek pushing me on all the way to today’s finish line," Knox said.

"I never suffered so much on a bike before and I’m pretty sure I wouldn’t have made it to the end of the day without my wonderful teammates."