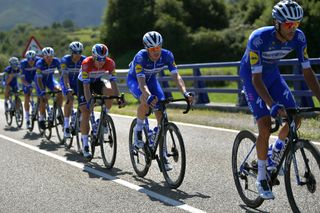 The top team in the world by just about any definition (Team Ineos are the only other real contender), Deceuninck-QuickStep have led the way in the number of race wins since 2013 and have topped the WorldTour points ranking for the past two years.

Founded in 2003 after a merger between Mapei and Domo-Farm Frites, the squad has been led ever since by Patrick Lefevere, who heads up an experienced cast of directeurs sportifs and riders.

In recent years, the team have lost a number of star riders as budgetary restraints bit, but other younger talents such as Julian Alaphilippe, Yves Lampaert, Fabio Jakobsen, Kasper Asgreen and Remco Evenepoel have stepped up to easily fill those voids.

Deceuninck-QuickStep may not have quite matched the record quantity (73) of wins they clocked up in 2018, but they more than compensated with the startling quality of their haul, which included Milan-San Remo, Paris-Roubaix, Flèche Wallonne, Strade Bianche, Omloop Het Nieuwsblad, Kuurne-Brussel-Kuurne and the Clásica San Sebastian, as well as stages in two out of three Grand Tours.

Alaphilippe led the way with a dozen wins, as well as 14 days in the maillot jaune and fifth overall at the Tour de France. All told, some 16 different Deceuninck-QuickStep riders raised their arms in victory in 2019.

Julian Alaphilippe: The Frenchman as the outstanding rider of the 2019 season, winning Milan-San Remo, Flèche Wallonne and Strade Bianche before demonstrating hitherto unseen abilities as a stage race rider during his remarkable July. He will make his Tour of Flanders debut in 2020.

Remco Evenepoel: Still shy of his 20th birthday, Evenepoel only began racing in April 2017 but he took readily to the WorldTour in 2019, winning the Clásica San Sebastian and the European time trial title. He has already earned his place in the Belgian team for the Tokyo 2020 Olympics, and there seem to be few limits on what he might achieve.

Sam Bennett: The Irish fastman joins from Bora-Hansgrohe to replace Elia Viviani, having managed to extricate himself from the German team during the off-season. He has won stages at the Giro d’Italia and Vuelta a España over the past two seasons. The Tour de France surely beckons in 2020.

Bob Jungels: After winning Liège-Bastogne-Liège in 2018, Jungels was repurposed as a cobbled Classics rider in 2019, with considerable success. He soloed to win Kuurne-Brussel-Kuurne and placed third at Dwars door Vlaanderen. He tired by the Tour of Flanders but the experience will stand to him in 2020.

The collective. Big names come and go, but Deceuninck-QuickStep seem to keep on winning regardless of the names on the roster.

The cobbled Classics unit is something of a microcosm for the team as a whole. The Tom Boonen era ended in 2017, but QuickStep remained the dominant force in the Flemish Classics the following year, when Niki Terpstra won the Tour of Flanders and E3 Harelbeke.

Terpstra departed for Total-Direct Energie in 2019, but his absence was immediately offset by the performances of Jungels and Kasper Asgreen, while Zdenek Štybar and Philippe Gilbert won in Harelbeke and Roubaix, respectively. Gilbert has left for Lotto Soudal this winter, but, as ever, Lefevere’s team will find a way to compensate for that loss in March and April.

The 'next man up' philosophy is also apparent in the sprint department, where Sam Bennett is the latest fast man to step into a role previously occupied – with notable success – by Mark Cavendish, Marcel Kittel and Elia Viviani. Fabio Jakobsen and Alvaro Hodeg, meanwhile, give Deceuninck-QuickStep a wealth of sprint options across the calendar.

It helps, of course, that the team boasts some of the best riders in the peloton, and the team made a significant investment in securing Alaphilippe to a new contract last May. The Frenchman may struggle to match the sheer volume of his 2019 success, but he is capable of winning on just about every terrain. His Tour of Flanders debut will be fascinating to watch, and he has unfinished business at Liège-Bastogne-Liège.

Lefevere has also tied Evenepoel down to a long-term contract. The Belgian youngster was signed as a long-term prospect, but his remarkable 2019 suggests that he will continue to yield vast and immediate dividends. Elsewhere, riders like Jungels, Asgreen, Stybar and Yves Lampaert have the quality and the flexibility to lead or support as required.

The departure of Enric Mas to Movistar means that Deceuninck-QuickStep no longer have a Grand Tour podium finisher on their books. General classification contenders have always been in short supply on Lefevere’s teams, at least since he left Mapei.

That said, Alaphilippe almost won the 2019 Tour, winning the pivotal Pau time trial and wearing the maillot jaune all the way until the final Friday of the race. It remains to be seen if his remarkable July was a once-off feat like Thomas Voeckler in 2011 or the beginning of a metamorphosis into a Grand Tour contender like Laurent Jalabert in 1995.

Alaphilippe’s ability as a rouleur and his previous exploits in the mountains suggests the latter, but earlier this month, Lefevere said that he did not want Alaphilippe to focus on Grand Tours until 2022 at the earliest.

Bob Jungels has placed sixth (2016) and eighth (2017) at the Giro d'Italia, but, on the evidence of 2019 at least, his emphasis on the cobbled Classics may impinge on his ability to improve on those results over three weeks. James Knox showed promise in placing 11th on the Vuelta, while in the longer term, Evenepoel will hope to be the answer to Deceuninck-QuickStep’s one and only – and relative – weak point.

Ever since a disastrous 2011 campaign that prompted some soul-searching, QuickStep have consistently exceeded the sum of their parts, and there is no reason to believe that trend will change in 2020.

Mathieu van der Poel and Wout van Aert may be the coming men of the Classics, but the road to victory in March and April will continue to run through Deceuninck-QuickStep.

Kasper Asgreen’s development is worth following closely, and Sam Bennett looks an ideal fit as the team’s lead sprinter. At 27, Alaphilippe is only reaching his peak, and Evenepoel, it seems, is only getting started.