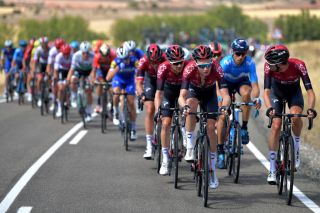 Team Ineos in the echelons stage 17 at the Vuelta a Espana (Image credit: Getty Images)

At the stage 17 finish in Guadalajara of this year's Vuelta a España, no matter the language spoken, rider after rider agreed that what they had experienced was one of the most exceptional stages of any Grand Tour.

Gusting winds blasting across the start in Aranda de Duero made it seem likely there could be echelon formations at some point. The whole stage was exposed and rolling, accumulating 2000m of climbing without a single classified ascent.

Nobody expected that after three kilometres the stage would erupt into a 40-rider breakaway and turn into a 216-kilometre chase all the way to the finish in Guadalajara.

It was a day when Primož Roglič's lead hung by the thinnest of threads. Climber Nairo Quintana (Movistar) made up more time on his rivals than in all the previous mountains stages and moved into second place overall. And 40 riders effectively hijacked an entire Grand Tour and turned it into a kind of one-day Classic. The speed was only one of the multiple factors that made stage 17 of the 2019 Vuelta feel so different.

"Everyone knew it was going to happen, crosswinds from the start, big wide road, the first move went," said double Het Nieuwsblad winner and Paris-Roubaix podium finisher Ian Stannard (Team Ineos). He was part of the front group until the closing kilometres.

"Somebody got into the gutter, 30 guys went clear, and that was it. Day over," he said. "I'm pretty surprised Jumbo-Visma didn't get on it, but there we are."

The collaboration was unusually good for such a large group. Deceuninck-QuickStep's presence in numbers, with six riders out of a possible seven, helped make a difference.

"A lot of the bigger guys were there, enjoying a flat day and a bit of wind," Stannard said. "You've got to commit in those conditions otherwise you're flapping around in the gutter, and it's a really hard day then.

"Everyone rode well then. Ineos wanted the stage, that's what it's all about now, I came a bit short in the final, but there we are."

With ten Grand Tours to his name, Stannard said he had never experienced a day like the Vuelta's stage 17 in all his previous career, echoing what stage winner Philippe Gilbert had said.

"Qatar, you have some pretty hard days in a stage race, but not 220 kilometres. No time for a breather either - I'm pretty nailed now."

Doull also told a group of reporters that it had been a crazy day.

"It was a windy day, gusting up to 50kph and literally as the [race director's] car went [to start the stage – ed.] everyone sprinted for the car, it was straight in the gutter, and after two or three kilometres, there was maybe 40 or 50 of us in the front," Doull said.

One of the key powerhouses in the move was Deceuninck-QuickStep's Tim Declercq, later singled out by stage winner Gilbert for praise for his tireless work in the 40-rider move.

"We said in the meeting if it was this windy, it's best to start from the gun, full gas," Declercq said. "Some teams thought it was way too early because it was 220 kilometres."

"But in the end it was a really, really hard stage that suited us the best and we had a textbook finish.

"It was a historical stage, a 220-kilometre time trial with all the GC guys bar one behind, I've never done one like that before," said Declercq's teammate and stage winner Philippe Gilbert.

However, the Belgian proudly pointed out that windy, flat, exposed days are the kinds of condition where Deceuninck-QuickStep excel.

"Echelons are in the DNA of this team," Gilbert said, "Qatar was the most specific stage race for windy days, and we always dominated that. In De Panne, too, we used the echelons to make up big differences, and I love doing that.

"It's good in cycling when it's not just strength that counts, but also technique. And that's what happened today."