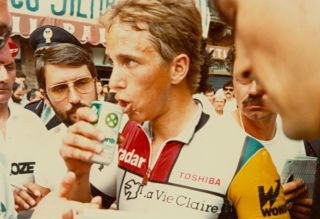 La Vie Claire’s Greg LeMond after a setback in the Siena time trial at the 1986 Giro d’Italia (Image credit: Sirotti)

On Friday, the 2020 Giro d’Italia was due to visit Calabria for the race’s first stage on the Italian mainland. The Giro has been postponed due to the COVID-19 pandemic, and stage 7 from Mileto to Camigliatello Silano is rescheduled for October 9. In the meantime, Cyclingnews looks back to Greg LeMond’s lone Giro stage win, which came in nearby Cosenza in 1986, and his challenge for that year's overall title.

Greg LeMond’s reputation as a man who had eyes only for the Tour de France and World Championships stems primarily from his second act as a rider, in the years after the 1987 hunting accident that almost cost him his life.

His scant regard for the other grand appointments on the calendar in that period was perhaps best encapsulated by the 1990 Giro d'Italia, where he arrived at the start in Bari wearing the rainbow jersey but already divested of any interest in the general classification.

After labouring at the rear of the peloton for two weeks, LeMond made a cameo off the front as part of the early break on the road to Dobbiaco on stage 15, only to suffer from cramps in the finale and drop back through the field.

A history of foreign starts at the Giro d'Italia

Team Ineos and the Giro d'Italia: The highs and lows since 2010

The Smoking Kangaroo: John Trevorrow and the 1981 Giro d'Italia

"I came to lose kilos ahead of the Tour," LeMond explained afterwards.

The verdict of the Italian press was withering – "LeMond has mistaken the Giro for a diet," sniffed La Stampa – but the American was undeterred. He reached Milan in 105th place overall, almost three hours behind Gianni Bugno, and then won the 1990 Tour de France. It was a repeat of a template that had already served LeMond well the previous summer, when he trashed himself into shape at the Giro ahead of his dramatic renaissance at the Tour.

Yet while the Giro served as a rather public training camp for LeMond in the years after his hunting accident, his tilt at the corsa rosa was rather more wholehearted in 1986, the year he became the first American winner of the Tour de France.

LeMond had made his Giro debut in 1985, lining up alongside Bernard Hinault as part of a strong La Vie Claire squad. Le Blaireau was riding his third Giro and seeking his third overall win, and he effectively crowned himself when he won the time trial to Maddaloni on stage 12, even if – not for the last time – he floated the idea of engineering a Grand Tour victory for his teammate instead.

"I have one hand on the Giro; they'll have to take it off me. And I could even decide to hand it to Greg LeMond," said Hinault after the time trial, although – not for the last time – he eventually thought better of the idea. LeMond rode as a dutiful and deluxe domestique in the high mountains that followed, settling for third overall in Lucca, while Hinault maintained his 100 per cent record at the Giro.

Hinault later suggested that he might try to help LeMond to win the Giro and Tour the following year, although he eventually opted to miss the Italian race altogether, leaving the American alone at the head of La Vie Claire on the 1986 race. Although LeMond had won just once that season, he lined up for the Grande Partenza in Palermo not just as the leading foreign challenge to Francesco Moser and Giuseppe Saronni, but as the outright favourite, given his status as Hinault's heir-in-waiting.

Even before the Giro had left Sicily, however, LeMond's hopes were floundering. He was among the fallers on stage 2 to Catania, conceding 1:38 to his rivals and doing little to conceal his annoyance at the finish. A day after the crash that would cost Emiliano Ravasio his life – the Italian completed the stage but died in hospital two weeks later – there was outrage in the gruppo at the condition of the roads.

"They don't care anything about the safety of the riders," Saronni complained at the finish, while La Vie Claire directeur sportif Paul Koechli blamed the low-flying television helicopter.

LeMond's challenge suffered a further setback on the final day in Sicily, where Saronni's Del Tongo squad pipped Moser's Supermercati Brianzoli in the Taormina team time trial, while La Vie Claire had to settle for third, some 1:41 back. It left LeMond more than three minutes off the maglia rosa when the Giro reached the mainland and forced him immediately onto the offensive, even if an attack on the road to Nicotera was quickly snuffed out.

LeMond's only stage victory from his seven Giro appearances came the next day, when the race remained in Calabria for a rugged 194km haul to Cosenza. The chief obstacle came in the form of the Passo della Crocetta, where Moser lost ground and Roberto Visentini laid down his first marker of the race by dancing clear 3km from the top. He had 1:35 on the group of favourites, including LeMond at the summit, and some 2:20 on Moser, but his advantage dwindled on the long circuit around Cosenza that preceded the finish.

Visentini was caught with a little under 5km remaining, and a reduced front group fought out the stage honours. Saronni was the obvious favourite but LeMond, doubtless with the Goodwood Worlds in mind, knew he couldn't outstrip the Italian in a sprint. Instead, LeMond clipped off the front just before the flamme rouge, having been teed up by teammate Steve Bauer, and he held on to claim the spoils by two seconds from Saronni, Massimo Ghirotto and Stefano Colagè.

"I made up 1:15 plus a 20-second bonus on Moser. That's a lot to make up, so maybe the race is changing for the good," LeMond said before mounting the podium.

Now 15th overall, LeMond began to move up the general classification as the race moved northwards, despite the relative lack of climbing on a route tailored, like so many in the 1980s, to the strengths of Moser and Saronni.

After the Terminillo largely failed to break up the GC men, LeMond described the climb as "non-existent", but he would have expected to fare better in the time trial to Siena on stage 12. He was quickest at the last intermediate checkpoint but found himself over-geared on the stiff haul to the Piazza del Campo, dropping to fifth, 40 seconds behind winner Lech Piasecki.

That left LeMond some 3:47 off Saronni's maglia rosa and, crucially, over two minutes down on Visentini, who was – temporarily at least – shaking off the charge of brittleness that had been levelled against him throughout his career.

Visentini and LeMond were the best of the GC men on the Alpine stage 14 to Sauze d'Oulx, won by Martin Earley, and they reiterated that status on the summit finish to Foppolo three days later. LeMond took second place on the stage, nine seconds down on Pedro Muñoz, but Visentini was just a further 11 seconds back, enough to move into the overall lead, although the race was overshadowed by news of Ravasio's death in Palermo.

The flat stage 18 time trial across the Po from Piacenza to Cremona seemed to present an obvious opportunity for LeMond to start clawing back his two-minute deficit on Visentini. Instead, he struggled to find his rhythm on the 36km test, coming home a lowly 12th on the stage, 1:41 down on the winner Moser, and conceding a further 21 seconds to Visentini to boot.

"I don't know what to say. It seems that everything has become very complicated," LeMond said afterwards, and although there was still the Dolomite tappone on the penultimate day to come, it was clear that the Giro was effectively decided.

Neither Saronni nor Moser – second and third overall – were going to trouble Visentini on the mammoth stage to Bolzano by way of the Rolle, Pordoi, Campolongo and Gardena. LeMond, for his part, made a brace of tentative attempts on the Rolle, but Visentini was equal to both, and the race for the pink jersey ended there and then.

LeMond completed the Giro in Merano the following day in fourth place overall, and with his stock damaged, at least in the eyes of his Italian hosts.

"The much-maligned Italian cycling has put into perspective the presumptuous Greg LeMond, maybe the only mistaken investment of a brash businessman like Bernard Tapie," Il Corriere della Sera crowed.

LeMond, for his part, acknowledged that his morale had never recovered from his losses in Sicily.

"Maybe it affected my mental outlook. When you're already 3:30 behind without even starting the race, it affects you," he said before the final stage – and he suggested that he would rather not return to the Giro again. "It's better to do the Vuelta or the Tour of Colombia and then the Tour. It's all extremely complicated here."

Seven weeks later, LeMond rode into Paris in the maillot jaune, having beaten Hinault in one of the most tumultuous Tours in history. The Giro disappointment was swiftly excised, and he would even return to the race five more times, but never again with the remotest of designs on overall victory.