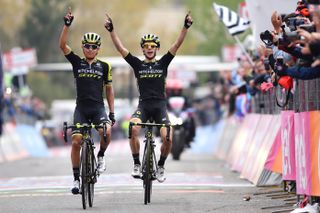 On Wednesday, the 2020 Giro d’Italia was due to visit Mount Etna for the race’s first summit finish. The Giro has been postponed due to the COVID-19 pandemic, and stage 5 from Enna to Mount Etna is rescheduled for October 7. In the meantime, Cyclingnews casts a glance over the Giro’s previous visits to the volcano.

The Giro d'Italia didn't climb Mount Etna when it first visited Sicily in 1930, but the volcano made an impact on the race all the same. Or, more accurately, on the eventual race winner. Luigi Marchisio's debut Giro risked coming to a premature end when he was struck in the eye by a chip of volcanic rock as the gruppo skirted the base of Etna on stage 2.

Undeterred, the 21-year-old stayed in the race, won the next day's stage to Messina and held the overall lead all the way to Milan, even though he was compelled to wear a bandage over his eye for several days.

A history of foreign starts at the Giro d'Italia

Team Ineos and the Giro d'Italia: The highs and lows since 2010

"In Palermo, I was treated by a specialist who advised me not to continue the race because I risked losing my sight," Marchisio said when the race reached Milan. "Losing my sight is one thing, but not winning the Giro would really have bothered me."

Etna remained but a frustrated observer when the corsa rosa returned to Sicily in 1949. Indeed, the summit was shrouded in heavy cloud when the Giro passed through the pistachio groves of Bronte below on stage 2. The novelist Dino Buzzati immortalised that year's race with a series of colour pieces for Il Corriere della Sera, and he imagined the annoyance of the mighty volcano at missing out on seeing Coppi and Bartali ride past: "The same old rotten luck. The Giro hasn't come to Sicily for 19 years. It finally comes this year [and] I've been trying to shake off these rotten clouds for two days."

It was only in 1967, on the Giro's fifth visit to the island, that the race finally scaled Mount Etna for the first of five summit finishes to date. More often than not, Etna comes early in the race, and overall contenders have been compelled to play a waiting game on its sparse slopes, but the mighty volcano always carries more than a whiff of danger.

The 1967 Giro made a two-day detour to Sicily at the end of the opening week, and stage 7 climbed to 1,892 metres above sea level for a stage finish at the mountain lodge of Rifugio Sapienza, although the anticipated eruption of the general classification never materialised. Instead, in protest at the lengthy transfers imposed by race director Vincenzo Torriani, the gruppo rode at a rather tectonic pace until the final three kilometres of the stage.

Franco Bitossi streaked to victory ahead of Aurelio Gonzales-Puente at the summit, but the next day's headlines were about the obvious go-slow beforehand rather than for Cuore Matto’s winning effort. In the pages of La Stampa, Gianni Pignata archly noted the many Sicilian fans at the roadside brandishing signs bearing the legend 'Grazie Torriani!'

"We can add a Grazie Torriani of our own, but ours is a bit more ironic," he wrote, pointing out that the riders had first travelled by overnight ferry from Naples to Palermo and then, after a circuit stage in Palermo, faced a five-hour train ride onwards to Catania. "A strange episode was noted during the Catania-Etna stage, which should have been the first rendezvous for the favourites: not a riders' strike, but something that looked very like it from close up."

Although the Giro was a frequent visitor to Sicily in the intervening period, 22 years passed before the race returned to finish at Mount Etna. The 1989 Giro began on the island with a short, flat stage from Taormina to Catania, but then headed for an early summit finish on stage 2 with a 132km leg to the Rifugio Sapienza.

This time out, the race climbed only to 1,302 metres above sea level – "a semi-sprint," sniffed journalist Gian Paolo Ormezzano, although he applauded the fact that the race finished by a hotel rebuilt after it was destroyed in the eruption of 1983 – and a group of more than 20 riders duly remained in contention on reaching the final kilometre. Acacio da Silva, newly arrived at Carrera after a stint as Sean Kelly's wingman at Kas, was live to all danger on the final approach to the line, tracking Tony Rominger's move beneath the flamme rouge and then tracking Ivan Ivanov when the Alfa Lum rider accelerated shortly afterwards.

With a little under 300 metres to go, Da Silva launched a searing effort of his own, and the Portuguese rider held off Luis Herrera, Rominger and Marino Lejaretta to claim victory and a temporary hold on the maglia rosa. The eventual overall winner, Laurent Fignon, rolled home in the same time in sixth place.

The Giro has been a more frequent visitor to Mount Etna in the 21st century, and the race's arrival in 2011 coincided with a period when the volcano came increasingly to be used a training-camp location for Grand Tour contenders. The late Michele Scarponi visited twice in the build-up to the 2011 Giro, and he spoke to Marco Pastonesi of La Gazzetta dello Sport of the subtle difficulties of the climb.

"Etna isn't one of those places where you feel like you've already been there if you've watched it on TV or studied it on a map," Scarponi said, although he still didn't anticipate that the climb, which came on stage 9 of a tumultuous race, would provoke telling gaps among the overall contenders. "It's hard but you go up it quickly. It doesn't provoke a selection, at least not among the GC men. There's a chance of it finishing in a sprint."

Alberto Contador had other ideas. The Court of Arbitration for Sport had yet to deliberate on his positive test for clenbuterol at the previous year's Tour de France, and the Spaniard was thus free to compete at the Giro. Having outlined his intentions with a surprise attack at Tropea the previous day, Contador shredded the group of favourites with a vicious acceleration 6km from the summit.

Only Scarponi could initially match Contador's acceleration, but he soon relented as the Spaniard bridged across to a resurgent José Rujano. On the final approach to Rifugio Sapienza, Rujano, too, had to give best as Contador flashed across the line with 50 seconds in hand on Vincenzo Nibali and over a minute on Scarponi.

Contador seized the maglia rosa and would hold it all the way to Milan – only to lose it in February 2012, when CAS handed him a backdated two-year ban and stripped him of both the 2010 Tour de France and 2011 Giro titles.

All eyes were on Vincenzo Nibali when the Giro hit the slopes of Mount Etna on stage 4. He had already raced on the mountain in 2011, of course, but that was before either of his overall victories at the Giro, his Tour triumph of 2014 and his high-profile move to the newly founded Bahrain-Merida team in 2017.

The volcano is an intrinsic part of the origin myth of Lo Squalo. Aged 10, he rode to the summit from Linguaglossa, becoming so weary that he had to be towed by his mother's car in the final kilometres, and there was a degree of local expectation that he might complete the circle by winning atop the mountain 22 years later.

This time out, the Giro approached the finish at Rifugio Sapienza by a more arduous route, with pitches of 12% on the 18km haul up the volcano from Nicolosi. Nibali's Bahrain-Merida teammate Franco Pellizotti tested the waters 9km from the top, before Nibali himself unsheathed an acceleration of his own with 4km remaining in a bid to test rival Nairo Quintana. A block headwind, however, soon put paid to his effort.

"It wasn't easy to attack with a headwind like that, but I tried, just to see if it would kick off with attacks and counter attacks," Nibali said afterwards.

The eventual Giro winner, Tom Dumoulin (Sunweb), underscored his form by making a tentative dig of his own after Nibali was brought back, but the day belonged to lone escapee Jan Polanc (UAE Team Emirates). Part of the day's early break, the Slovenian dropped his companions on the lower slopes and then carefully managed his buffer to hold on to win by 19 seconds from Ilnur Zakarin.

"I wasn't thinking about anything anymore – just that I was close to finishing and that every second counted," Polanc said.

Take two. After the race largely failed to ignite on Etna 12 months previously, Mauro Vegni brought the Giro back in 2018 via a more arduous approach from Ragalna, and with a higher finishing line, at the astrophysical observatory some 1,736 metres above sea level. Statistically, the ascent was not altogether different from the one tackled on previous occasions – 15km at an average gradient of 6.5%, with maximum slopes of 15% – but local riders warned beforehand that its irregular slopes made it more taxing than other sides of the volcano.

Etna once again came early in the Giro, on stage 6, but after a lengthy transfer from the Grande Partenza in Israel and two wearying stages that traversed Sicily's rugged interior. The preamble to Etna was tougher, too, and a break of 28 riders forged clear with more than 100km remaining.

Mitchelton-Scott placed Esteban Chaves in the move, and the Colombian proceeded to dance clear of his companions with 5km to go, just as the pink jersey group had closed to within 30 seconds or so of the remnants of the break.

Behind, Chaves' teammate Simon Yates dutifully tracked the accelerations in the fragmenting group of favourites, responding firmly when men like Domenico Pozzovivo and Thibaut Pinot forced the pace. Then, having surveyed the opposition, Yates unleashed an attack of his own with 1,500m to go.

"He kicked like a bull," LottoNL-Jumbo's George Bennett said afterwards. Yates swooped across to his teammate Chaves within sight of the line, but waved him through to claim the stage victory. The Mitchelton-Scott pair came home 26 seconds ahead of the chasers, who included Sunweb's Tom Dumoulin and Chris Froome (Team Sky), and Yates moved into the maglia rosa.

It was a precursor of what was to come, as Yates glided to a hat-trick of stage wins, all while wearing the pink jersey, although, cruelly, he would lose the Giro to Froome just two days from the finish in Rome, when he conceded more than 38 minutes after losing contact on the Finestre.