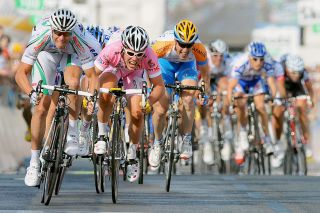 On Sunday, the 2020 Giro d’Italia should have been on its second stage, from Budapest to Gyor, in Hungary, which was likely to finish in a bunch sprint. To fill the void left by the COVID-19 pandemic, Cyclingnews is filling the three weeks by revisiting some of the most compelling storylines from corresponding stages of past editions. For stage 2, it’s Alessandro Petacchi and Mark Cavendish, who ended up as teammates but started out as rivals, clashing for the first time on the world stage on stage 2 of the 2009 Giro.

"I didn't know much about Cavendish," were the brash words uttered by Alessandro Petacchi in Trieste after he'd won the second stage of the 2009 Giro d'Italia. Granted, the British sprinter was still only 23 and in his third season as a pro, but he was hardly an unknown; four Tour de France stages were already on his palmarès and, if the previous July was too much of a stretch, he'd won Milan-San Remo barely a month previously.

"I saw him win San Remo," Petacchi acknowledged, "but San Remo is very different to stage races. I wanted to see if he was that fast."

The slight air of haughtiness was justified by the 130 races Petacchi, then 35, had won by that point in his career. It was perhaps even a veiled mark of respect, an acknowledgement that the young Manxman could well go on to eclipse his achievements, but that such status wouldn't be handed to him on a plate.

In Trieste, Petacchi let Cavendish know who was boss – at least for the time being.

The sprint was a relatively straightforward one, and Cavendish's Columbia-HTC team were dominating the lead-out, as they would do so often. Mark Renshaw calmly takes Cavendish, wearing the maglia rosa after crossing the line first in HTC's opening-day team time trial victory, inside 200 metres and there's apparently only one outcome.

But suddenly Petacchi, without waiting for Cavendish to leave Renshaw, hits out and surges clear. In his first Giro sprint since serving a ban for salbutamol, he holds off a scrambling Cavendish, who can only exclaim his frustration as he crosses the line.

"I took a risk but I knew long sprints don't suit his characteristics," Petacchi said. "Sure, I won easily, but it's not certain that tomorrow or the next time will be the same."

Meanwhile Cavendish, despite the consolation of retaining the pink jersey, made no bones about his performances, even branding himself 'lazy'.

"My team was perfect, everything was perfect, except for me at the finish. Normally, I should have jumped earlier. I was lazy. I left it too late to make the sprint easier for myself, but Alessandro got the jump on me - you can't beat him when he gets the jump.

When asked if he'd fallen into the trap of a superiority complex, a question an elder Cavendish might greet with a frosty glare, he said: "Yeah. Probably, yeah. Serves me right."

Fast forward two years and Petacchi and Cavendish met again on stage 2 of the 2011 Giro d'Italia.

Much had changed in the interim. It wasn’t a complete changing of the guard, given Petacchi won seven times in 2010, including two stages at the Tour de France.

However, by then Cavendish was moving through the gears, winning 27 races since the corresponding stage in 2009, including two later in that Giro. At the 2010 Tour, he'd dispatched Petacchi five times.

Yet, on home soil, Petacchi, now 37, proved he still knew how to get the better of Cavendish, and the way he did so bore an uncanny resemblance to 2009.

Whereas this time Garmin-Cervélo lead the bunch into the final kilometre, Renshaw comes to the fore late on to pilot Cavendish into the final 200 metres. Once again, he waits, and once again, Petacchi gets the jump with 150m to go. Having sprang to the right, he moves over the left, by which point he is fully clear of his rival. Cavendish begins to claw his way back but Petacchi goes the distance and raises his arms in celebration. As he does so, Cavendish waves his in remonstration.

"Petacchi is a good guy but in the last 200 metres he moved three times,” he complained later, the consolation of the pink jersey not so comforting this time around. “The judges usually relegate someone when they do that."

Petacchi, for his part, held his ground. "I don't understand what I've done wrong," he said. "I went on the left and he went on the right. I moved slightly but he wasn't next to me. I didn't put him into the barriers because I was ahead of him."

Cavendish soon tried to back-pedal on his comments, insisting he had no problem with Petacchi, but with what he perceived as double standards from race officials.

“I felt hard done by because for the same movement I would be disqualified,” he said. “When I had time to calm down and think logically about the situation, when the adrenaline had stopped flowing, I learned that it’s not fair for me to make a complaint about Alessandro because of my frustration with other people.”

Any hint of animosity, then, was short lived, and the guard did soon change for good. Cavendish went on to win two stages at that Giro, and 79 more to this day, while Petacchi’s victory was one of the last few of his career, and certainly the last at the top level.

The pair’s careers would continue to intertwine, however, albeit in an altogether different way.

With Petacchi clearly slowing down by the end of 2012, and Cavendish looking to engineer a move away from Team Sky, where he’d won three Tour stages but felt constrained by the team’s GC approach, the pair started talking. The idea was that Cavendish would take Petacchi as a lead-out man, but his move to QuickStep was taking time, and Petacchi put pen to paper on a contract extension at Lampre.

The 2013 season had barely begun and Petacchi was sick of life at the Italian team. He terminated his contract and apparently retired in April, citing a need to spend more time with his family, only for reports to surface later that month of a mid-season move to QuickStep. The UCI blocked the initial attempt that would have seen him lead Cavendish out at the Giro, but he nevertheless joined that August.

Sparks flew instantly. In their first race together, the 2013 Tour of Britain, Cavendish won three stages, and Petacchi played no small part in all of them.

“He’s been perfect all week,” Cavendish said. “We’ve been rivals a lot of my career but he’s a really good guy. Obviously the Tour of Britain is my home race but he was a big factor in me coming here because I wanted to ride with him."

A blemish has since appeared on those victories, as Petacchi’s name was scrubbed off the results sheet last year, after he was convicted of doping in 2012 and 2013 by the UCI as part of the Operation Aderlass blood doping investigation.

The partnership wouldn’t quite be the same in 2014, as Renshaw, who’d tried to forge his own path at Rabobank in the intervening years, reunited with Cavendish at QuickStep. That pushed Petacchi down the lead-out train, although he still had a hand in four wins at the Tour of Turkey, one at the Volta ao Algarve, and a memorable one-two with Cavendish at Tirreno-Adriatico.

Nor would their relationship come full circle, as Cavendish rode the Tour of California instead of the Giro in 2014, and then crashed on the opening day of the Tour de France. The pair never raced together again, with Petacchi hanging up his wheels – this time for good – after half a season with Southeast in 2015.

Those two stages at the Giro d’Italia prove his point, in turn exposing Petacchi’s assertions he “didn’t know much about Cavendish” as bluff and bluster. However it was expressed, in rivalry and in cooperation, Petacchi and Cavendish was a relationship built on mutual respect.