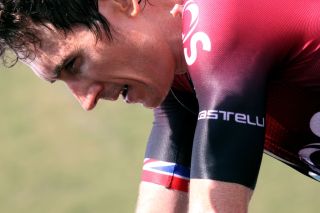 After a rollercoaster 15 months, Geraint Thomas heads into Sunday's World Championships road race with few expectations on his shoulders as he tries to burn the last embers of energy of a physically and mentally demanding period of his career.

When the Team Ineos rider won the Tour de France in 2018 he was on cloud nine, surfing a wave of euphoria as Wales’s first Grand Tour winner. The commitments of a Tour winner are never-ending and while a world of celeb selfies, awards and personal appearance might be novel for a short period, they are ultimately distractions from the real world of professional cycling, where sacrifice, hardship most importantly commitment are paramount.

This year Thomas started his season on the back foot and despite admirably chasing a second straight Tour title; he was never quite able to replicate the form and finesse he demonstrated in 2018.

The physical nature of the sport is easy to see from television screens, Strava segments, and power files but the real toll is often mental, with pressure and intensity almost immensurable for a rider expected to challenge for victory at the Tour de France.

On the eve of the World Championships Thomas is relaxed. The glare of Tour success has shifted to Egan Bernal, and Thomas’ body language is back to the casual and almost nonchalant levels of before his 2018 victory.

“For me, it was just the mental side of it,” he says when asked about lingering fatigue from this year’s Tour.

“It was a hard race and when that’s your at the pinnacle and everything has built up towards that, you’ve got the Worlds and you want to build up for that, it’s just difficult.”

“The difference between winning the Tour and coming second is massive. Last year when I won it was just constant. Your phone is constantly going and you’re going pulled left right and centre. You come second and no one really cares. You’re back to normal and you’re back to business. It’s tough because I’m all or nothing.”

Thomas’ track days were built around steep peaks and troughs in terms of form and focus. He has applied the same principles to his road career and is currently on a dip after a long season. This winter is more about recharging the mind than the body.

“When you have a big goal it’s all geared to all that and it’s so intense. Once that’s done you need that time to just relax. There are some guys who always at 90 per cent but to win and perform at the races I want to do I need to be at 100 per cent and then down at 50 for other parts of the year. I’ve always had that mentality since my days on the track,” he says.

“With the Tour being a big goal you then have a down period through November and then the whole build-up starts. It’s hard to get out of that routine, unless you have different goals.”

"When you actually sit back and look at it, it's full-on. You finally just relax and I went away for five days to Greece with my wife and switched off completely and then it's when you just get back on your bike and get going again. All that build-up, which you've kind of suppressed in a way, it comes out and it's quite hard to really sort of reach those heights again so soon."

The decision not to ride the World Championship time trial was made due to the physical and mental fatigue that Thomas has put himself through.

A recent period off allowed him to finally catch up and process what he had gone through over the last year and to put things into context, Thomas was lying on the tarmac at the Tour de Suisse after a heavy fall that threatened to ruin his entire season. The injuries to his head and face were still visible when he lined out for the Tour in July but he never once used that experience as an excuse for coming second.

"The build-up certainly wasn't the same as last year. There was so much more attention and people analyzing how you are," Thomas says.

"I think it was just staying strong mentally and just dealing with those little knocks along the way. I think physically just coming back from such a long time off as well was tough. Last year I started racing in Algarve and was second and you're in the racing already and it's just a roll; whereas this year, I was just was so much lower. You're building and building and just staying strong mentally, just keep going, keep going and just having confidence in what you're doing and in yourself; that was probably the biggest challenge."

“It wasn’t tough in terms of getting up in the morning and doing it. There's a lot more obviously attention, a lot more talk, and just that white noise really. Even during the Tour, that was tough. It's afterwards when you sit back and you realise how much sort of stress has been around all the whole time. Or not really stress, but that focus is always on your mind, always in the back your mind.

With the Tour de France and Giro d'Italia still to unveil their routes for 2020, Thomas can remain on the fence when it comes to naming his preference for next season. He admits that the prospect of racing the Giro interests him but with Bernal, Richard Carapaz, and a returning Chris Froome in the mix, Team Ineos are spoilt for choice when it comes to lining up their troops at Grand Tour.

Thomas believes that two leaders at Grand Tours can work out, and points to the last two editions of the race as prime examples but the final call on race plans is unlikely to be made until December.

“I’m going to wait until I’ve seen the courses of the Giro and the Tour. I’ll go from there. You’d think that Egan would ride the Tour again as the defending champion. Froome has the big goal of winning five. I’m not going to make a call until the December training camp when I sit down with the team. Even if I did the Giro, that would excite me when I was getting out of bed in the morning,” he says.

“I think two (leaders) does work. It’s worked for the last two years. We can keep that same sort of philosophy. As I said, I’ll look at both the routes, see what motivates me, see what the other guys are thinking and go from there.”

After the Worlds on Sunday Thomas can finally put his feet up. After such an insanely tough period of his life, he probably deserves it.