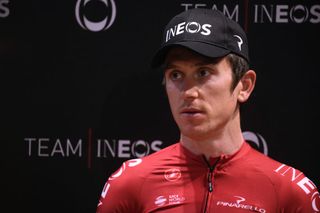 Geraint Thomas (Great Britain) has withdrawn from participating in the time trial at the UCI Road World Championships, citing a lack of form as the reason for skipping Wednesday's event.

The Welshman, who finished second at the Tour de France, made the decision to opt in to the time trial and road race earlier in the week but has said that he doesn't feel in optimum condition to compete in the time trial.

"I've tried to get back into shape after my post-Tour break, but unfortunately I don't feel in good enough shape to perform my best," Thomas said in a statement from British Cycling. "

"So, the decision was made with my coach and [team coach] Matt Brammeier at British Cycling to skip the TT and commit to the team for the road race."

The decision ends a 'will he or won't he' question over Thomas' participation in the race. His was a late decision, with the 32-year-old leaving it until after the Canadian WorldTour races to throw his hat into the ring.

Thomas, who raced the Deutschland Tour before heading to Canada in the build-up to the Worlds, will be replaced by Ribble Pro Cycling's John Archibald.

The 28-year-old finished runner-up behind Alex Dowsett in the time trial at the British National Championships back in June. Archibald, who is already in the team for the mixed relay, will join Dowsett in riding the time trial.

"He's had a good season, finishing second in the elite men's time trial at the UK National Road Championships, and I have no doubt he will put in a performance that will do the team and the fans proud."

It will be @jjzarchibald who will now ride the elite men's time trial at the @Yorkshire2019 UCI Road World Championships on Wednesday 25th September! 🙌@GeraintThomas86 has withdrawn to commit himself to next Sunday's road race 🚴🇬🇧#Yorkshire2019 pic.twitter.com/qqWQh22CToSeptember 21, 2019