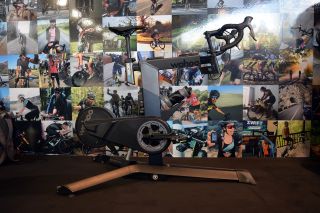 Slotting right in at the top of its indoor trainer product range, Wahoo has today launched the KICKR BIKE, an amalgamation of the Wahoo KICKR Ecosystem into a premium standalone indoor cycling set-up.

“Over the past five years, we’ve seen an incredible increase in indoor cycling and the sales of KICKR indoor smart trainers. During this time, we’ve built the most complete ecosystem of connected indoor cycling products," says Mike Saturnia, CEO of Wahoo Fitness.

"The KICKR BIKE represents the next generation of indoor smart training for Wahoo and delivers the most complete, unparalleled riding experience in its class. It is the ultimate product for discerning, data-driven athletes who are ready for a feature-rich, top-quality, responsive, dedicated indoor bike as the new cornerstone of their fitness.”

In mysterious, typical Wahoo fashion, the Wahoo stand at Eurobike 2019 displayed little more than boxes plastered in 'top secret', ahead of the big launch at 10am CET on Wednesday. Following a short presentation, the boxes were lifted to showcase the all-new KICKR BIKE set up.

The KICKR BIKE, which uses Gates Carbon Drive for a maintenance-free life, combines the ride feel of the KICKR trainer with the gradient simulation of the KICKR CLIMB, and adds braking (yes, braking) along with tailored shifting ability. Thanks to the precision motor, each shift comes with a realistic, tactile feel through the pedals.

Out-of-the-box setup is a straightforward process. The Wahoo App provides a step-by-step walkthrough, and even provides an augmented reality bike-fit process. Users can take a photo of their bike, enter their own measurements, or upload from professional fit systems such as Retul or Guru. This then outputs measurements to be manually applied to the bike's five points of adjustment. Connectivity has been upgraded for the KICKR BIKE, as well as for other KICKR devices, to allow for up to three simultaneous Bluetooth connections.

The set up also facilitates replication of your outdoor-bike's groupset; the gear ratio can be adjusted to any chainring and cassette configuration, and the shift buttons can be modified to emulate Shimano, SRAM or Campagnolo. Multifunction buttons adorn the top of the hoods, which, for the time being, can only control the gradient simulation, but eventually will be programmed for in-app navigation and for easy access to features such as Zwift PowerUps.

The crank arms feature five separate lengths, for ease of fit adjustment, and the use of industry sizing standards makes it easy to fit your own pedals, handlebars and saddle. The maximum power is claimed to be 2200w, which is more than likely ample.

At $3500.00 (£TBC), the KICKR BIKE is certainly at the premium end of the market, but Wahoo was careful not to ostracise users with complexity.

“However, we went to great lengths to ensure the product remained simple and intuitive to set up and operate. We’ve learned that it’s not enough to make a product with a lot of great features. We knew the KICKR BIKE needed to be as effortless as possible to use so athletes can focus on training and not troubleshooting.”