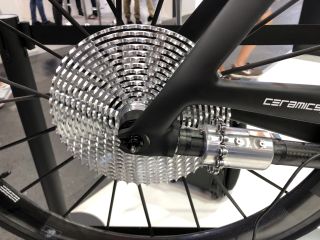 It is not often we see a complete redesign of a drivetrain, innovation is usually approached within the standard chain and derailleur configuration that has existed since the birth of geared bikes. However, CeramicSpeed is attempting to break the mould with its Driven concept drivetrain.

CeramicSpeed introduced the Driven concept just over a year ago with bold claims of a 99% efficiency rate among other advantages over a standard drivetrain. This first example wasn’t rideable, however. It didn’t feature any gear changing mechanism and was restricted to road bikes.

This year CermicSpeed have been working with the University of Colorado’s Mechanical Engineering Department and are back with an updated version which answers three of the biggest questions.

So how does it work?

Driven uses a dual Pinion configuration with a fixed front Pinion and a split rear Pinion that handles the gear shifts. The Pinions are made up of a ring of CeramicSpeed bearings which form the method of engagement.

The gear change is wireless with the shifting mechanism, actuator and rechargeable battery housed inside the hollow carbon shaft. By splitting the rear Pinion each half can move independently with gear changes using what CeramicSpeed describes as a “step and follow pattern”.

When a gear is changed the lead half of the Pinion moves to the new gear position once unconnected with the cassette. The trailing half then follows once it has disconnected from the cassette completing the gear change. This could be likened to a dual-clutch system in a car as the drivetrain is not disconnected during gear changes. The Driven system can shift to any point on the cassette allowing multiple gears to be changed in a single mechanical movement thanks to a self-aligning decoupler system. CeramicSpeed claims that this produces a seamless gear change with shifting speeds that could outperform a traditional electric drivetrain.

The system is quite a lot to wrap your head around so CeramicSpeed has released this video explaining how the system works.

CeramicSpeed has begun rider load testing with a single speed version of Driven on a velodrome and testing is apparently on-going. They also recently visited Specialized’s 'WinTunnel' wind tunnel facility resulting in the claim that Driven is the most aerodynamic drivetrain ever tested.

When the first prototype was unveiled, Driven was quickly written off as a road bike only concept due to the variables in effective chainstay length of full-suspension mountain bikes. CeramicSpeed has addressed this by using a telescopic shaft that moves and extends to follow the path of the rear wheel as the suspension compresses.

Although drivetrain efficiency and aerodynamics are less important in mountain biking a shaft drive may offer other benefits. By freeing the rear suspension from the influence of chain forces, the suspension will work more effectively and as the system is more compact it will reduce the risk of damage caused by trail strikes.

With a system using such high tolerances, there has been much talk in regards to the system's durability. Valid questions regarding shifting under load, longevity, real-world flex and its ability to cope with dirt are still to be answered. However, at this proof-of-concept stage, these hurdles are not much of a concern and points that CeramicSpeed will likely address as development continues.

Is this the future?

Seeing the developments that have been made and examples of Driven being shown on bikes is exciting. Driven is still very much a concept and until test models are available for scrutiny in the real world it is very hard to speculate how this drivetrain will compare to the old faithful derailleur or other drivetrain approaches like Pinion’s P-Line. Whether Driven will reach the public at this stage is still unknown however with these promising developments this unique drivetrain is certainly moving in the right direction.