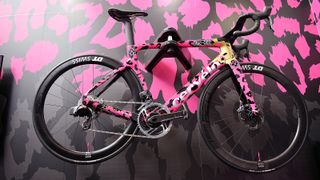 Cyclingnews' time at Eurobike 2019 has now come to a close, the Eurobike blues are setting in and we're looking back fondly to our week in Friedrichshafen.

Yes, the days are gone where every major bike brand would launch their entire product range at the show, but Eurobike is still a launchpad for myriad manufacturers, who showcase their best bits and most recent releases.

This lack of routine opens the doors to varying trends at each edition of Eurobike, with 2019 being the year of the following three.

Eurobike 2019 saw the rise of the e-bike. Every corner of every hall featured more batteries than the Duracell Bunny's Christmas list. The Bianchi stand featured an enormous revolving carousel dedicated to their new e-MTB range, Park Tools got in on the act, launching an e-bike-specific chain cleaner, and Look launched a number of battery powered bikes, including a gravel-specific e-bike

Talking of gravel, this subsection of cycling can no longer be considered a niche. More people are riding gravel bikes than ever before, most bike brands offer a gravel-specific model, and Shimano are leading the trend with their GRX groupset, gravel race shoes, and gravel-focussed components such as handlebars and dropper posts.

Thirdly, we've all heard that #OutsideIsFree, but at Eurobike 2019, we learned that inside can be rather expensive if you want all the bells and whistles, however, there are definitely options for every budget. There's a huge demand for indoor cycling, and that was demonstrated by the vast quantity of indoor trainers on show. We reported on the launch of the Wahoo KICKR BIKE, but we also saw the Tacx NEO Bike Smart, the SRM Smart IT, and hundreds of turbo trainers to suit all budgets. Zwift launched in-game steering as well as the recreating the Yorkshire course ahead of the UCI World Championships.

Throughout our time in Friedrichshafen, situated adjacent to the picturesque body of water that is Lake Constance, Cyclingnews encountered some of the most innovative, forward-thinking technology currently available in the cycling industry. However, there were a few items that stood out for a different reason. Some simply due to their extravagant paintwork, others due to material choice, and a particular bike that simply put function over form in the bid to be the fastest. Check out our weird-and-wonderful gallery below.