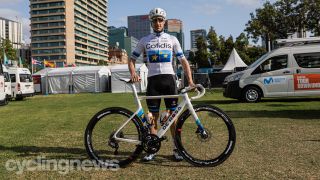 Italian sprinter Elia Viviani has swapped from the Belgian powerhouse Deceuninck-QuickStep to French outfit Cofidis Solutions Crédits which has just made the jump from UCI Continental to WorldTour status. And with that, the Italian sprinter has plenty of new kit, all while sporting his colours as the European Continental Champion.

Viviani's first outing aboard his new bike and repping his new team in Adelaide has been a story of contrasts. After the Schwalbe Classic criterium, the Italian sprinter was raving about his lead-out train, despite rolling across the line behind Caleb Ewan for second place. Only a few days later Viviani was caught in the pileup 1.5km from the end of Stage 2 and hit the deck hard, threatening his future in the race — luckily he was cleared by medical staff and decided to soldier on despite the road rash.

We have already had a look at Viviani's new bike, but we caught up with him again ahead of the race to take a closer look at the rest of his new gear.

Ekoi sponsored teams have been seen riding in a few of the brand's helmets at the TDU, including the Legende which french climber Romain Bardet helped design. Viviani opts for the Corsa Evo on hot days, and the AR14 on days where he needs a bit of aero benefit. Both of which are painted in his Euro Champ colours.

The Corsa Evo uses a few more aero centric design cues than the Legende, with a more closed silhouette and a rounded rear profile, but has the same magnetic closure.

Ekoi also provides Viviani with his sunnies, the Italian opting for the Perso Evo 10. Claimed to weigh just 28g, the Perso Evo 10 has four vents in the lenses and six in the frame — hence the name.

Viviani's shades feature Ekoi's Cat.3 lens which sees a low visible light transmission, and the frameless design allows the Italian to keep track of rival sprinters hovering at the edges of his peripheral vision.

Nalini provides Cofidis' clothing, and ahead of his training ride, Viviani was wearing a training jersey; the main panels were made with a perforated fabric and lycra is used in the sleeves. According to Nalini the textiles used Cofidis' team jerseys has received the brand's 'Mantodry' treatment which is claimed to improve wicking.

It's not uncommon for riders to have custom-tailored kits and beyond his Euro Champ colours, Viviani tells Cyclingnews he asked Nalini to extend the sleeves of his jersey nearly to the elbow.

When it came to race day, Viviani was sporting a short sleeve skinsuit complete with full-size rear pockets.

Sometimes when riders earn the right to wear a champions jersey, they choose to add white shorts to the kit; thankfully Viviani opted for black, with the Euro Champ colours on the leg band. The Italian also tells us he had Nalini add some length to his shorts.

Elia Viviani has been a long-time partner of Italian shoe outfit DMT and helped to design the KR1 kicks seen here. The shoes are knitted using a proprietary construction said to eliminate hot spots and improve breathability. A single Boa dial snugs the upper, which like the rest of Viviani's kit is finished in his Euro champ colours.

Last season with Deceuninck-QuickStep, Vivani was relying on a Bryton Aero 60 computer to record his rides, but SRM is a Cofidis sponsor, so the sprinter is now using a PC8 head unit to count his watts. As there is no reason for someone who has earned the right to ride in national champions (or in this case continental champ) colours to have any piece of gear not acknowledging that fact, Viviani's silver SRM sees to blue stripes around the edge.