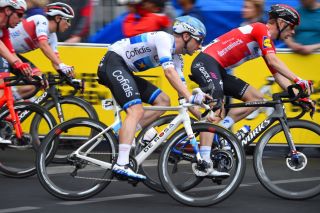 It may have 'only' been second place for Elia Viviani at Sunday's Schwalbe Classic circuit race – the traditional prelude to the Tour Down Under, which starts on Tuesday – but the Italian sprinter was nevertheless delighted with his new Cofidis teammates.

Lotto Soudal's Caleb Ewan took the victory by around four bike lengths, but Viviani was adamant that his team's efforts were "super" and "on point" during what was the 30-year-old's first race with his new French WorldTour squad.

"I'm really happy to have experienced the team's approach to things," Viviani told the press at the finish.

"Marco Mathis did a perfect job working on the front the whole time, and then Nathan Haas and Kenneth Vanbilsen were amazing from around 10 or 12 laps to go through to the last lap to get me in position, and then Simone Consonni did the perfect lead-out.

"OK, it was a short race, but it was a good sign of how we're going to work this year."

Consonni, who's also new to Cofidis this season, having joined from UAE Team Emirates, held on following his lead-out duties to take the final podium place, which also filled Viviani with confidence for the week, and season, to come.

"Finishing second and third showed that I have a super strong last man," he said. "I think we're already on point and, if not on point, we just have to adjust a few small things. For example, we were really far back coming into the last corner. We were behind Lotto, but they were around 10th back anyway, as EF Pro Cycling and Team Ineos were right up at the front.

"With 400 metres to go, we were probably still a bit far back, and Caleb did an amazing sprint, so there was probably no way to beat him today," continued Viviani. "So we're definitely happy with the job we did, and it's clear that the team's got the right approach, with a winning mentality, so I think we've started 2020 really well."

Of the rain that fell before and during the race – before mercifully only coming down much harder once the race was over – Viviani admitted that it had made the road feel slippery at times.

"But I was happy enough," he said. "It would be too easy to start this race thinking, 'Oh, the Tour Down Under starts in two days', but it wasn't like that. We wanted to race after spending the past few months getting ready for it, and it feels good to have that feeling of adrenalin in the sprint again. Although it was slippery, we raced from the front and stayed out of danger, so it was great."