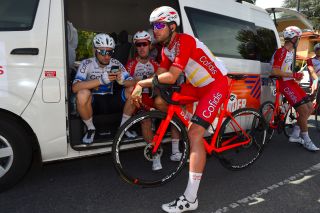 Nathan Haas chats with Cofidis teammate and European road race champion Elia Viviani ahead of the start of stage 2 of the 2020 Tour Down Under in Woodside (Image credit: Bettini Photo)

French WorldTour team Cofidis were left in a very similar situation to their Australian counterparts at Mitchelton-Scott following the conclusion of stage 2 of the Tour Down Under in Stirling on Wednesday afternoon.

It was a day of sharply contrasting emotions. Haas battled with Ewan and Impey on the rising finish, with the Australian doing enough to finish third. In contrast, European road race champion Elia Viviani – another new signing this year to the French team - was left battered, bruised, grazed and dazed, sitting for some time in his team van before being taken to the race's medical tent.

The Italian was then taken to hospital for further tests, where serious injury was ruled out, but his continued participation in the race remains in doubt.

"At the hospital exams and scans ruled out fractures and trauma but my left side of the body is full of grazes and I have a sore knee," Viviani said. "With the team we will evaluate the situation tomorrow."

Like Yates, it remains to be seen whether Viviani will be able to continue in the Tour Down Under on Thursday, although his injuries at least initially appeared to be less severe than those of the British climber.

"I'm feeling really terrible for Elia right now," Haas told a small gathering of journalists, including Cyclingnews, next to the team van in which Viviani was initially assessed by his team.

"We were here for him today, and he's super hungry, so this is a disappointment, but I'm sure a guy like him knows how to come back from this."

The 30-year-old Australian all-rounder added that he had been just in front of the crash when it happened with 1.5km of the 134km stage to go.

"A big wave came from the left, and I just had to slam on my brakes, and the crash happened," Haas explained.

"I've been told that it actually wasn't on my wheel – it was a few wheels back – but it was a big, loud bang, and I hate to see that in cycling.

"In terms of my third place today, I don't really care about my position," Haas admitted.

"I'm just finally finding my mojo again after what was easily the hardest year of my career/life last year. I've said this before, but when people believe in you, you start to believe in yourself again. Since having some nice chats with Cédric Vasseur [Cofidis team manager] last April, it's been inspiring, and I'm hoping that I can start to repay the faith the team has put in me."

"There are no expectations, and the word 'should' – as my good mentor tells me – is the most dangerous word in any language," he said. "I'm just taking things day-by-day, and that's really just my ethos for the rest of my year, and hopefully cycling.

"It's nice to be back up there," he said of his third place on Wednesday's stage. "We do shoot to win and when that victory comes, it's going to be really nice."

Unfortunately today I was involved in a crash about 1.5km from the finish. At the hospital exams and scans ruled out fractures and trauma but my left side of the body is full of grazes and I have a sore knee. With the team we will evaluate the situation tmw. #tourdownunder pic.twitter.com/2OccYPM616January 22, 2020