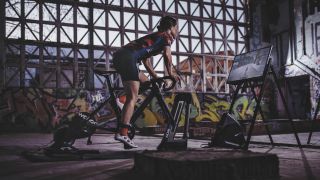 Carbon fibre is a bit of a wonder material; it can be sculpted into a shape that will slice through the wind with minimal resistance, and tuned to flex in one direction while being stiffer than a 2x4 in another. However, it is also quite fragile, and even a microscopic crack can propagate to compromise your entire bike.

While the best turbo trainers have come a long way over the past few years, we’ve all heard the horror stories of carbon bikes popping chain and seat stays after significant efforts on the stationary trainer. Indoor cycling can already command a considerable investment at the best of times - even a cheap indoor setup can set you back three figures - so adding a broken carbon fibre frame to the bill isn't one that anyone wants to think about. However, until recently, big brands like Specialized and Canyon saw any damage sustained from use on the turbo outside the scope of their warranty.

Considering riders all over the world have put in millions of collective miles in their basements, garages, and spare bedrooms over the past few months, we thought it would be high time to investigate whether riding the indoor trainer was damaging your bike.

There is no doubt riding a turbo trainer puts a unique set of forces through a bike frame that would not otherwise be experienced, in even the most extreme riding situations. But these horror stories appeared to be more in the realm of tall tales, as incidents of bikes broken on trainers are rare. Conducting a bit of 'bro-science', according to a survey of a group of riding friends and acquaintances, not a single respondent had damaged a bike riding the trainer, nor did they know anyone who had.

The trainer is no longer a no go

In recent years, indoor cycling has completely exploded, and an aspect of the sport that had previously been reserved only for times when you couldn’t ride outdoors, now riders were turning to the trainer not only for the efficiency of structured training but also because it was fun. Even still, some brands were staunchly opposed to their bikes being used with trainers.

Canyon was one of the last major brands holding out to change its tune on turbo trainers, changing its warranty policy in November 2019, with the Aeroad, Ultimate, Endurace, Grail, Inflite, Speedmax and Exceed being officially approved for use with an indoor trainer — only a few months after the brand announced its Canyon ZCC eRacing team. So, we asked Canyon what changed.

Christian Worth, Canyon’s Director of Quality Management, tells Cyclingnews, “The fixation on the turbo trainer is causing a different load transmission into the rear triangle of the frame (compared to normal bike riding). A new test setup has been developed to simulate these conditions on the test rig. The new test has become an integral part of Canyon’s testing conditions. It means that in case a bike is likely to be used on a turbo trainer, this test will be part of the development process and consequently, the new requirement can have an impact on the design of new bikes.”

We asked if the new testing resulted in any changes to the frames, and Worth did not elaborate.

Specialized was another brand that famously said its carbon bikes were not designed or tested for use with a trainer. The California brand has changed its tune when it comes to trainers, thanks to a new testing protocol.

“In response to the increasing popularity of trainers, we have developed a very rigorous proprietary test which all MY20 and later road frames have to pass in order to be released to the market. While we cannot predict every single trainer use and/or setup, we believe our test is rigorous enough to be able to recommend our MY20 and later road frames for common trainer use,” says Kelly Henningsen, Specialized's PR and Operations Manager for Road.

Henningsen says Specialized's new testing protocol takes into account the twisting forces between the rear axle and BB and is designed to put its frames through an entire life cycle of heavy trainer use.

“It’s almost like a simulation of being stuck indoors for the next ten years,” she says. “Still, it is important to follow the trainer manufacturer’s instructions and make sure everything is set up properly. We also recommend a periodic safety inspection in case of frequent or hard trainer use."

While some other brands, like Cannondale, lightly encourage you to whack an old bike into your trainer in their warranty documentation, this suggestion is more focused on wear parts and corrosion than broken carbon.

The MY20 SuperSix EVO Owners Manual states, “If you ride a trainer a lot, consider using an old bike: Corrosion from sweat will take its toll. Weight is irrelevant. Save wear on your expensive components.”

Raoul Luescher has been tinkering with composites for over 25-years, he is a former Boeing engineer, has designed carbon components for Olympic and professional athletes and had a hand in the Bouwmeester Composites Tamar mountain bikes rims — which bare a striking resemblance to the relatively new Zipp 3Zero Moto hoops. Luescher is also the man behind the Luescher Teknik carbon repair outfit in Melbourne, Australia and has deconstructed and reconstructed carbon frames from every major brand.

“From a damage perspective, we do see problems with dropouts sometimes, as well as the less specific incidents such as the frame not being secured properly in the trainer leading to damage at the chainstays or seatstays,” he says.

Leuscher also says he sees issues arising from corrosion due to salt buildup on the front of the bike and metal frame inserts like headset cups and bottle cage bosses.

This is because carbon and aluminium are on opposite sides of the galvanic scale, and when they are connected with an electrolyte, like sweat, they react and speed corrosion.

When it comes to damage reported to trainer brands, Brian Turany, Saris’ Category Manager, said the common thing they have seen is when a quick release is not fully seated into the dropout

“So the user will have one dropout sitting correctly and the other is not in contact with an endcap. This problem is pretty obvious at the outset because the shifting with be degraded. A second problem is when users over tighten a QR and compress the dropouts too much.

I was at an indoor e-sport race several months ago and witnessed a rider crash when their bike disconnected from a trainer. The rider was a very powerful sprinter, and the bike had QR dropouts. The bike and rider were OK,” he said.

This, of course, would not be a problem if your bike uses thru-axels.

With people spending so much time on the trainer in recent years, it's no surprise that clever minds who are handy with power tools have cooked up contraptions, which not only make riding inside more interactive but relieve some of the discomfort associated with pedalling a bike that is essentially bolted to the floor. There are literally hundreds of designs for DIY rocker plates and even a few commercial options culminating in the uber-expensive Saris MP1. But, are they effective at relieving additional stress put on frames?

We polled many of the big bike brands, including Specialized, Cannondale, Canyon, and Trek for their thoughts surrounding rocker plates. The resounding response was either politely declining the opportunity to comment, or said something along the lines of ‘we need to do more research.’

We also asked Saris if they had done any frame stress testing with the MP1, Turany told Cyclingnews, “We fatigue test out trainers, but do not have the means to test multiple bike frames.”

“However, especially when compared to riding trails or rough roads, I believe riding a trainer or a trainer on an MP1 is less strenuous for the bike,” he says.

“The fore-aft movement is what helps relieve saddle pressure for the rider more than any other movement. I would suspect that the same is true for the bike,” Turany continues.

Because rocker plates are still a comparably young technology, and there is so much variance in their designs, we can’t say beyond an educated guess whether or not they effectively dissipate forces being put through the frame, or not. Although we do know that they do reduce saddle pressure.

“The fore-aft movement is triggered (mostly) by the dead spot in a rider’s pedal stroke during seated efforts. When we were developing the Hammer (later the H2 and H3) we found that a very heavy flywheel in the trainer helped to reduce saddle pressure for the rider. The fore-aft movement of the MP1 further reduces saddle pressure by allowing energy that would normally cause a slight “bounce” in the saddle to transition into a movement of the rider with the bike,” Turany says.

“We have some early evidence that side-to-side movement (or possibly the combination of movements) can also help correct or mitigate bad habits,” he continues.

While there is the possibility of an indoor trainer inflicting damage on an expensive carbon bike, so can crashing out on the road, or letting your bike fall over at a coffee shop. Engaging in another purely anecdotal survey; in the age of social media, if people were regularly destroying bikes riding the indoor trainer, Facebook, Instagram and Twitter would be alight; there would be photos, videos, and epic rants about broken bikes. Does this lack of bike busting content mean it never happens? No. Does it mean it doesn't happen very frequently? Probably.

At the end of the day, when it comes to warranty coverage, brands are pretty risk-averse. The fact that every major brand extends this coverage to riding the indoor train; with the stipulation that it’s set up properly, tells us the risk of breaking your bike is pretty low.

There are a few things you can do to keep your bike running efficiently, the most critical being maintaining your drivetrain. Even though riding inside removes most of the contamination your drivetrain would otherwise experience, wear parts are still moving and generating friction — don't forget a clean drivetrain is also worth a few free watts.

On that same note, give your frame and cockpit a wipe down as metal parts are susceptible to corrosion and salt buildup may damage paintwork too. Consider draping a towel over your bars or using a sweat net.

Always use the steel skewer your trainer is shipped with, as the forces that go through the back end of a trainer can easily bend a lightweight titanium quick release. On that note, double-check that the quick release is fully seated into the dropouts. If your bike and trainer setup uses a thru-axle, don’t put the axle in dry, make sure there is a light coating of grease.

If your front wheel is still attached, give it a turn every few rides to spread the load over all the spokes, rather than just a few all the time.