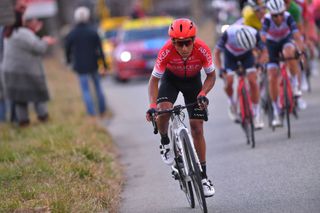 Nairo Quintana has been the stand-out rider so far in 2020 (Image credit: Getty Images)

Professional racing may have been put on hiatus in March, but cycling fans were still treated to two and a half months of enthralling racing, with moments to savour from Colombia to Australia, and Provence to Paris-Nice, with a sprinkling of action from Belgium's Opening Weekend thrown in for good measure.

For our team of the year (so far), we’ve tried to pick a balanced squad, and one that can compete in stage races and on the one-day front, while at the same time keeping an eye on the sprint finishes.

The rules – that we’ve admittedly made up – are simple. The team has to comprise eight riders and we’ve decided to select only one rider per team, which was tricky when it came to deciding on combinations such as domestiques and sprinters. We’ve given spots to two GC leaders, one specialist climber, a road captain, one Classics star, a sprinter, and one super-domestique. The key was trying to provide versatility.

Obviously, it’s subjective, so please feel free to select your eight riders and post them in the comments below. There are no right or wrong answers but, obviously, some are more right than others.

There was certainly no shortage of potential GC leaders to choose from, with Tadej Pogacar and Jakob Fuglsang among the prominent contenders but, when it came to selecting our team’s focal point, we couldn’t look beyond Nairo Quintana.

Many sneered and sniggered at the Colombian’s move to a second division team after several years of disillusionment at Movistar but, just a few months into the new campaign and Quintana looks to have rediscovered his mojo. Wins at Tour de la Provence and Tour du Var were followed up with a stage and sixth overall at Paris-Nice.

Considering that the 30-year-old hadn’t won a stage race of any note since 2017, the start to his 2020 campaign was more than just encouraging. What’s more, the former Giro d'Italia and Vuelta a España winner was racing aggressively and with the type of conviction we’ve not seen from him in years.

Several of Patrick Lefevere’s men could have made this list but it’s hard to look past Evenepoel after his incredible start to the 2020 season. The 20-year-old has already won five races in this calendar year, including the overall titles in the two races he’s started.

GC wins were built on formidable climbing performances but also two time trial victories in both the Vuelta a San Juan and Volta ao Algarve. The latter saw him beat Rohan Dennis by 10 seconds.

Whether that form could have been replicated in a three-week arena like the Giro d’Italia is an unknown, but every indication suggests that the young rider would have left a mark in his first Grand Tour.

Pogacar has won more, but Yates provided a timely reminder of both his class and the Slovenian’s lack of experience with a sumptuous display on the first mountain-top finish at the UAE Tour. The Mitchelton rider set the fastest ever time up Jebel Hafeet and in the process wrapped up the overall title.

On the second time up the climb, two days later, he marked all of his rivals – including Pogacar – before the race was brought to a premature end due to the coronavirus outbreak.

There are climbers who have won more than Yates this season, but few have laid down such a memorable marker as the British rider in the Middle East. Fuglsang arguably provides more when it comes to the Classics, but Yates has something of a point to prove after a shallow return in 2019.

Sep Vanmarcke and Sergio Higuita were both candidates for this team, especially given they combined so well at Paris-Nice earlier in the month. The Belgian was an option for road captain, but we couldn’t bring Vanmarcke along for the ride while leaving his pokemon-sized Colombian friend at home. Therefore, we’ve elected Clarke as our road captain.

You’d be hard pushed to find a more composed and respected road captain in the peloton, with the Australian an instrumental cog in the EF Pro Cycling machine. He has form, too, with a win in the Royal Bernard Drome Classic, and two other second places from early season French races.

Clarke can perform independently on several terrains too, which makes his versatility a key component for his selection.

If you want to go by form and nothing else then look no further than Fabio Jakobsen. He was our initial pick, based on the fact that he has accumulated as many wins as most of his competition and because he’s won in Belgium, Spain and Portugal over the past few months.

However, picking the flying Dutchman ensures that you can’t squeeze any of his Deceuninck-QuickStep teammates into the squad. With that in mind, we’ve plumbed for Caleb Ewan. Many of you would have selected the Australian regardless, but his three wins – the same number as Jakobsen – have all been at WorldTour level. The only blemish comes in the form of a winless Paris-Nice, but hardly any of the pure sprinters came away from France with any success.

The Classics riders have been limited to rare glimpses of action so far this year, but Jasper Stuyven’s win in Omloop Het Nieuwsblad meant that he had to be one of the first names down on our list. We looked at Tiesj Benoot as a possible candidate, but Stuyven provides the better all-round package and makes the grade for his talents on the cobbles – he’s a great shield in the wind and rain – and can even rise to the challenge when it comes to helping Ewan in the sprints.

With Evenepoel in the team, there’s no room for Kasper Asgreen, but Kung is more than capable of filling the shoes of a domestique role. The Swiss rider was instrumental in keeping Thibaut Pinot in contention at Paris-Nice and can handle himself over a number of terrains.

The former BMC Racing rider picks up the odd time trial win each year, too, and has experience in setting up lead-outs for Arnaud Démare.

We’ll admit, we’re picking Rowe for his reputation as well as his performances this season, but ask those within the peloton to name three of the best domestiques in the bunch and the vast majority will select the Welshman within their trio. It’s his versatility that makes the Team Ineos rider so important, and if you’re looking for a rider who can adapt to the demands of the cobbles and the mountains then there are few better.