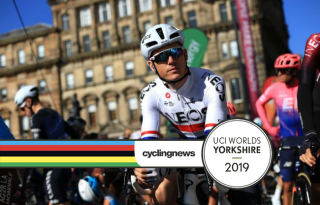 The final announcement of the Great Britain men’s team for the UCI Road World Championships in Yorkshire is still over a week away, with Matt Brammeier and the national selection team yet to make their final six-man selection. Set to lead the team is Ben Swift, who has enjoyed a mini-renaissance in his career since pulling on the British national champion’s jersey in June.

The 31-year-old is currently racing at the Tour of Britain as part of a strong Team Ineos line-up and, despite the national team having fewer riders than the full quota of eight at Worlds, Brammeier is confident that Swift can spearhead a strong challenge from the domestic team.

"Ben Swift, 100 per cent," Brammeier told Cyclingnews when asked about the leadership of the team.

"We're going all-in for Swifty. Obviously, we'll have a plan B and a plan C if he's not on it, but we're all confident in him. He's been thinking about this since he first saw the announcement about the Worlds being in Harrogate. Since then he's been all-in for it and getting better and better each day."

Brammeier admits he already has a strong idea for four or five of his six-man team but, with the Tour of Britain and the Vuelta a España still taking place, the former professional is in no hurry to make his final selection.

Geraint Thomas is, at the very least, set to ride the time trial, while the Yates brothers – Simon and Adam – and Luke Rowe are all among the long-list.

"We'll see how the lads come out of the Tour of Britain and the Vuelta, and we'll make the final call then. I just want to leave it as late as possible as there's a lot of bike racing between now and then," Brammeier added.

After two difficult seasons at UAE Team Emirates, the fact that Swift is even in contention for a leadership role is a welcome surprise for the national team.

At this point last year he was struggling for a contract but, after an initial approach from Lotto Soudal, he rejoined Team Sky [now Team Ineos] on a one-year deal. Even that process had its struggles, with an injury-blighted Spring ruling him out of the Classics. He returned to form at the Tour de Suisse and promptly won the national road race title in June.

Another consistent performance followed at the Tour de Pologne and Tour of Germany, while at the time of going to press he has managed three top-10 placings in the first four stages of the Tour of Britain.

"I had that crash earlier in the year and that put a different spin on things. Then it was all about trying to get better and better," Swift told Cyclingnews after stage 4 of the Tour of Britain.

"I took a break after the nationals and we said 'let's focus on the Worlds'. Then we've used each race as a bit of stepping stone. Hopefully, I can have good legs here and then we'll see how it goes."

Swift has already ridden the Worlds course in Harrogate and, while his national coach is willing to confidently proclaim him as the team's focal point, Swift is a tad more cautious, perhaps aware of how telegraphing the plans ahead of schedule came back to bite the team at London 2012.

"If you look at Great Britain, we've only got a select few riders who have proven it over the longer races. Over a course like that, we can do quite well and I think I can naturally be one of the leaders for that," Swift said.

The last time Swift arrived at the Worlds with form was in 2017 and he duly finished fifth in the reduced bunch sprint in Bergen. With two podium places in Milan-San Remo to his name, he certainly has the staying power and the pedigree to impress over the Harrogate course, even if he will go into the race behind the more established pre-race favourites.

That in itself could be a blessing in disguise, with the home nation not expected to control the race, especially since nations rankings means they will line up with just six riders.

"It's disappointing that we just missed out on that but the guys that we've got to fill those places are guys that can do two jobs," Swift said.

"It will change the way we have to race a little bit but, honestly, it's a long, long race and it's all about having numbers in the end."

Whatever the result, Swift has enjoyed one of the most consistent periods of his career in recent months, the results of which saw him recently awarded with a contract extension at Team Ineos for the next two seasons.

It's a team he has a natural affinity with, and the feeling certainly appears reciprocal. It might be inconsequential, but when riders leave pro teams they often hand in their phones before their numbers are immediately farmed out to new members of the roster.

Swift, after so many years with the team, was allowed to keep his number after leaving Team Sky at the end of 2016 and it's the same one he has now since his return to the squad. It's like he never left.

That said, the rider learned a great deal from his two disappointing years at UAE Team Emirates. In that period both parties never really settled with each other, but it was an experience that still revitalized Swift's love of racing.

"Now I feel that I've got that buzz back. The guys that are around me… you don't even have to say things, they just know and that makes a big difference. I still learned a lot at UAE. I don't think that it was a mistake.

"I think it made me a better rider because I enjoy things a lot more. You learn from the bad times, maybe even more than in the good times."

Brammeier will be hoping Swift can bring those good times to the national team. The Irishman has worked hard at instilling a collective spirit in the squad and has built on the fact that riding on a home circuit will inspire those who are selected.

"It's about the lads' commitment. Usually, with the Worlds, you don't start hearing from the lads until a month or two out, but it's been a consistent flow of communication between us all, talking about the race," Brammeier said.

"It's at home, so the excitement levels are massive, but we're also growing really well as a team. We've really worked on bringing the team together more."

Brammeier's next task will be selecting the final six riders to represent Great Britain. Then it will be up to Swift and the rest to deliver.