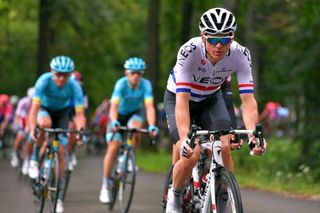 Ben Swift: Deep down I wanted to return to Team Sky

British road race champion Ben Swift will line up as part of the six-man Team Ineos squad at next month's Tour of Britain.

Swift won the king of the mountains jersey at the race back in 2007, while riding as a stagiaire for now defunct Pro Continental team Barloworld, and won the penultimate stage of the 2009 race between Hatherleigh and Yeovil while with Katusha. He's finished the race nine times, with a best placing of eighth overall in 2016 with Team Sky.

In 2017, Swift left the team to spend what were two fallow seasons at UAE Team Emirates, but he returned to Sky – and to winning ways – in 2019, winning the national championships in Norwich in June, soon after the team had changed name to Team Ineos.

"I love the Tour of Britain and can't wait to race on home roads in the national bands," Swift said in a Tour of Britain press release. "That's something I've dreamt of doing since I started my career.

"It's going to be a special week and we'll hope to do something special on the road, too. I know we're taking a strong team to the start in Glasgow, and we look forward to seeing great support out on the roads," he said.

"We're honoured that the reigning British road race champion will be competing in this year's race," added race director Mick Bennett. "I've enjoyed watching Ben's career since he made his Tour of Britain debut in 2006, and have a feeling he'll be in the mix for success this September."

The other members of the Team Ineos squad for the Tour of Britain are set to be announced next week. The eight-day stage race starts in Glasgow on September 7 and finishes in Manchester on September 14.