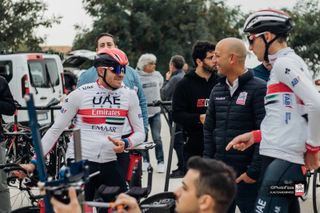 This squad rose from the ashes of the old Lampre set-up at the end of 2016. After a dubious deal with Chinese company TJ Sport fell through, things looked bleak, but then wealthy investors from Abu Dhabi came in late on. Now featuring a number of top performers and exciting young riders, it's a well-funded, ambitious project.

2019 was the first year that performances started to come in line with the investment being poured into the team, with a Grand Tour podium at the Vuelta a España through Tadej Pogačar, who also won three stages in Spain and overall titles at the Tour of California and Volta ao Algarve. Alexander Kristoff claimed the team’s first big Classic at Gent-Wevelgem, while Fernando Gaviria claimed a Giro d’Italia stage among five other victories.

Yet, it was still a slightly disappointing and frustrating season. The Tour de France was a disaster, as nutrition errors saw the whole team gain weight, with Kristoff telling us he gained nearly 6kg in the first week.

Gaviria won six races but his Giro victory was the result of a questionable disqualification and his season was derailed by a knee injury suffered in April that would eventually rule him out of the Tour. The team’s Grand Tour leader, Fabio Aru was still some way off his level of a few years ago as he recovered from iliac artery surgery, and his season ended with an early exit from the Vuelta as he came down with Cytomegalovirus.

Pogačar had won the Tour de l’Avenir but no one could have predicted the impact he made in his debut campaign, and with it the Slovenian turned UAE’s 2019 into a success story.

Tadej Pogačar: The Slovenian enjoyed one of the finest neo-pro campaigns of all time last year, and is poised to be one of the leading stage racers of this new decade. He makes his Tour de France debut this year and, while he's right when he says he has a lot to learn, it’d be no surprise if he was up there challenging.

Fernando Gaviria: The Colombian sprinter will lead the line in terms of bringing in victories. Before his difficult 2019 campaign, he had emerged as one of the very best sprinters in the world, with 14 wins in 2017, including four at the Giro on his Grand Tour debut, and two stages on his Tour de France debut in 2018. Injury-free, and with his old lead out man Maximiliano Richeze back in front of him, the big victories should start rolling again in 2020.

Alexander Kristoff: The former Tour of Flanders and Milan-San Remo winner may have lost a bit of top-end speed, but showed last year he can still challenge for major Classics.

Mikkel Bjerg: The Dane has won the U23 world time trial title three years in a row and already believes he's on of the ten best in the world, of any age. He's someone who could be winning big time trials before long, and we could also see him take on the Hour Record.

Pogačar might already represent the ‘present’ of this team, but he is part of a massive investment in the future. Since Matxín, a former talent scout at Deceuninck-QuickStep who had previously worked at Mapei and Saunier Duval, took the reigns as sporting manager at the start of 2018, the team have set about snapping up some of the brightest talents in the sport.

Joining Pogačar 12 months ago were U23 Giro winner Cristian Muñoz, Jasper Philipsen, and the Oliveira twins (Ivo and Rui), while this year sees the arrival of three-time U23 TT world champion Mikkel Bjerg, US stage racing prospect Brandon McNulty, U23 Giro winner Andrés Camilo Ardila, and Alessandro Covi. The average age of the squad is below 27 – the third lowest in the WorldTour.

After a shaky start to the UAE era, the team are not looking for quick fixes but are thinking long-term and patiently laying the foundations for the future. The fact the team’s backers are enabling them to do so is, in the fragile world of pro cycling sponsorship, a massive strength in itself. If even half of those riders go on to fulfil their potential, things look bright for the team.

If Pogačar’s Tour is to be a learning experience, they don’t have a reliable way of competing for a Grand Tour. Aru will ride the Tour, and we’ll have to wait and see whether he can get his career back on track, while top 10 is surely the height of what can be expected from David de la Cruz and Davide Formolo at the Giro. In any case, UAE have no shortage of contenders for future Grand Tours.

This is a team being built for the future, but 2020 is no write-off. With Pogačar, the future is now. And while the  jury is still out on Aru, the team has a number of capable performers – and winners – at the top level, including Gaviria, Kristoff, Formolo and Rui Costa.