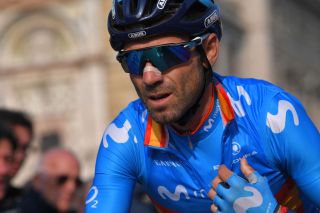 Since its foundation in 1980, the team has raced under a variety of banners – Reynolds, Banesto, ibanesto.com, Illes Balears, Caisse d'Epargne and Movistar – but the squad's Navarran identity has remained largely intact even as it expanded to meet the demands of the WorldTour era. Manager Eusebio Unzué has been with the team from the outset, taking over the reins from José Miguel Echavarri in 2008.

The team's halcyon days came in the 1990s, when Miguel Indurain won five consecutive Tours de France, and Movistar have enjoyed enduring success over the past decade, most notably through 2018 world champion Alejandro Valverde, Nairo Quintana – who won the 2014 Giro d'Italia and 2016 Vuelta a España – and Richard Carapaz, who won the 2019 Giro. Quintana, Carapaz and Mikel Landa have all departed during the off-season, leading to a sense that this might prove to be a transitional season for Movistar.

Movistar's haul of victories in 2019 was their lowest in eight years, and the much-vaunted 'trident' of Valverde, Quintana and Landa once again fell well short of the Tour podium.

It would be a stretch to say that Valverde suffered from the curse of the rainbow jersey – he still won five races and placed second overall at the Vuelta – but his spring campaign was a disappointment, encapsulated by his abandon at Liège-Bastogne-Liège.

Movistar's highlight was Richard Carapaz's assured victory at the Giro, although some of the gloss soon wore off when it emerged that the Ecuadorian was leaving for Team Ineos, bringing Andrey Amador with him. By then, it was clear that Quintana and Landa were also headed for the exit, but Movistar have survived more stinging departures, most notably Indurain's in January 1997.

Alejandro Valverde: Valverde has been a relentless and remorseless winner of races for most of a professional career that began in 2002. He spent 18 months on the sidelines in 2010 and 2011 after receiving a belated suspension for his implication in Operacion Puerto but somehow didn't miss a beat on his return and, remarkably, seemed to improve deep into his late 30s. He showed some signs of slowing down in the early part of 2019 but finished the season with strong showings at the Vuelta and Il Lombardia. The Tokyo Olympics will be the centrepiece of his 2020 season.

Enric Mas: It's not quite Abraham Olano replacing Indurain, but with Valverde seemingly eschewing any GC ambitions, new arrival Enric Mas finds himself carrying Movistar's Grand Tour hopes as he will be expected to fill the void left by Quintana, Landa and Carapaz. Mas, who joins from Deceuninck-QuickStep, took second overall at the 2018 Vuelta but endured a difficult Tour debut last year, reaching Paris in 22nd place.

Marc Soler: Nothing showed the disharmony in Movistar's ranks last season quite like Soler's theatrical show of dissent at being ordered to wait for Quintana on the road to Andorra at the Vuelta. Despite that setback, the Catalan took his best-ever Grand Tour finish of ninth in Madrid and will now look to build on the promise he showed when he won Paris-Nice in 2018. Given the paucity of proven Grand Tour riders in Movistar's ranks, he surely won't have cause to bemoan a lack of opportunity in 2020.

Valverde is something close to money in the bank for Movistar. The veteran's startling consistency means that he keeps the team's haul of WorldTour points ticking over throughout the season, and despite his emphasis on the Olympics in 2020 – he has already said that he will abandon the Tour ahead of the trip to Japan – he can be expected to perform a similar role this season.

The treasury of experience and know-how in the Movistar ranks – both on the road and in the team car – is another strong point. It wasn't immediately apparent amid the dysfunction of the trident, but the Giro was another matter altogether. At 25 years of age, Carapaz was a relatively untested maglia rosa, but as soon as he seized the lead in Italy, his teammates and directeurs sportifs seemed to know precisely how to keep it.

That kind of race management will be all the more important in 2020 as Movistar face into a season with a roster containing so many young riders and some unproven leaders. New arrivals Dario Cataldo and Davide Villella add some much-needed quality and knowledge to the team, while it will be fascinating to see whether marquee signing Mas can replicate his 2018 Vuelta showing in July. He didn't quite sparkle in 2019 but finished the season strongly with overall victory at the Tour of Guangxi, and he will look to continue in that line in 2020.

Losing Quintana and Landa seemed inevitable from the start of 2019, but watching Carapaz switch to Team Ineos will have been a particular disappointment for Unzué, who has lamented the role played by his agent Giuseppe Acquadro in the transfer. Andrey Amador, it seems, is set to follow Carapaz to Ineos, pending a decision from the UCI Arbitral Board, while yet another Acquadro client, Oscar Rodríguez, wound up moving from the defunct Euskadi-Murias to Astana this winter, rather than Movistar as had previously been anticipated.

The saga leaves Movistar's roster looking rather more callow than in years past. Unzué made 14 signings this winter to offset those high-profile departures, but only three of the new arrivals come from WorldTour teams: Mas, Villella and Cataldo.

Some exciting young talent has been acquired – American Matteo Jorgensen was fourth at the Ronde de l'Isard, while Colombians Einer Rubio and Juan Diego Alba finished on the podium of the under-23 Giro d'Italia – but, logically, they should take time to bed in to life at WorldTour level. With some eight riders under the age of 23 on their roster, Movistar look to be building for the decade to come, but, despite the lowering age profile at cycling's top table, that might mean a relative dearth of success in the short term.

The cobbled Classics have never been a strength for Movistar, and the departure of Jasha Sütterlin means that department has been weakened further. The team's lack of a bankable sprinter also impinges on their ability to rack up wins through the year. In the Grand Tours, meanwhile, much depends on Mas' ability to replicate the 2018 Vuelta, as well as the development of riders like Soler.

Although he turns 40 in April, Valverde should continue to weigh in with victories, while, whatever happens in July, Mas ought to be a reliable performer in week-long stage races through the season. One imagines that 2020 will be a season too soon for some of the neo-professionals on the team to shine, but their development will be worth tracking.