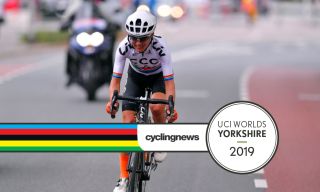 So far this season, I can’t say things have gone well. I haven’t had the race results I expected and it wasn’t for lack of form. I’ve put the work in, seen great improvements in training, and shown up to races with the legs to win; but, I’ve had bad luck race after race.

Just recently, I crashed in GP Plouay, at the Boels Ladies Tour, and again during the African Continental Championship road race. Knowing I’ve improved, it’s been frustrating, so it’s been about believing my luck will turn at exactly the right time ≠ and I’m hoping that’s at World Championships.

I’m targeting the individual time trial. Coming from a smaller cycling nation where we are a few riders up against the big cycling nations of Holland, the Germany, and Italy who all have full teams of 8 riders, you need to have a lot of luck to get a result in the road race. For the individual time trial, the team aspect is taken away so I’ve put my ambitions where I think I have the best possibility for a result.

The individual time trial is 30km. It’s not often we have the opportunity to race TTs that are so long, and the course itself makes it even more unique. I’ve recently had the chance to ride the course in real life and it’s going to be really tough.

The first 13km is undulating on a big, winding road and then, much to my delight, we will turn to face three climbs, each around one kilometre long. You will need to push hard during the first part to have a good time but no doubt the title will be decided on the climbs.

While I’m still going to need luck, I’m hoping those 30km will be the moment this season where I don’t have any bad luck.

Four days later, I will participate in the 149.4km road race along with my South African teammates Tiffany Keep, Maroesika Matthee, and Joanna van de Winkel. The road race is going to be very open and interesting thanks to the course.

The big climb on the course comes really early, at around the halfway point. Whether those 7km will have a big impact or not will be the interesting part. It’s early enough that it might not drop a lot of riders and, depending on the strategy of the big teams, we will have to see who will use the climb and who will put more emphasis on the three laps of the rolling and technical finishing circuit.

I haven’t put any pressure on myself for the road race but that doesn’t mean I’m not going to try and cash in all my bad luck the season for a chance.

Ashleigh-Moolman-Pasio is a world-class climber and a member of CCC-Liv. She has written a regular blog for Cyclingnews since 2016, touching on topics of gender equality in women’s and men’s professional cycling.