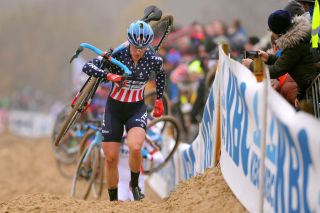 The USA Cycling Cyclo-cross National Championships are already under way at Steilacoom Park in Lakewood, Washington, outside of Tacoma, but the headliners will take on the bumpy, muddy course during a full day of racing on Sunday.

The junior men youth women [17-22], U23 men and elite men and women will all tackle the winding, spread-out 3.1km track at a venue that has been a staple of Pacific Northwest 'cross for decades.

Weather for the weekend will be typical Northwest fare, and a week of dark, wet days and heavy racing among the various amateur categories leading up to Sunday should do a thorough job of breaking in the course. Rain is forecast for the area on Saturday, with clouds forecast to break for Sunday's racing. Temperatures should hover just above 40 degrees Fahrenheit.

Among the biggest questions waiting to be answered Sunday in Washington is whether 41-year-old Katie Compton (KFC Racing-Trek-Knight) can add her 16th consecutive national title.

A return to the region where it all began in Portland in 2004 should provide good feelings for Compton, whose odds to repeat got a boost earlier this week when Ellen Noble (Trek Factory Racing CX), third last year behind Compton and second the year before, announced that she was pulling out of the race after coming down with flu.

The two riders beneath Fahringer in the US Pro CX rankings, Caroline Mani of France and Maghalie Rochette of Canada, are not eligible for US nationals, but fourth-ranked Honsinger, the reigning U23 champion, will be making her first attempt at an elite title and has ridden consistently at the pointy end of the women's domestic races all season.

The 22-year-old comes from Oregon and is used to the cold, wet weather they'll encounter this weekend, so she's a strong bet for the podium.

Keough has 22 races under her belt so far this season, although most of those have taken place overseas and so she is a bit of an unknown against domestic competition this year. She was eighth at the Tabor World Cup and fourth at the Bern World Cup. She raced last in Koksijde, finishing 19th. The 27-year-old World Cup winner has pressured Compton in the past, so look for her to do so again on Sunday.

The elite men's race will likely be decided by a group of three riders that have battled at the front of races throughout the US domestic season, where Kerry Werner (Kona-Maxxis-Shimano) beat Cannondale-Cyclocrossworld teammates Curtis White and reigning US champion Stephen Hyde for the USA Cycling Pro CX Calendar title.

Hyde is a three-time and reigning champion, but the 32-year-old has been battling back from injury and adversity over the past two seasons, opening the door fro challengers from both White and Werner.

Any of the three could pull off the win on Sunday, but Werner showed the most consistency throughout the season to lead the Pro CX Calendar rankings. Hyde, however, is a three-time champion and seems to know how to turn it on when the  jersey is on the line.

Other riders to watch include youngster Lance Haidet, who was fourth in the Pro CX standings behind Werner, White and Hyde, and Haidet's Donnely Aevolo teammate Gage Hecht, a strong rider who dealt with an injury early on but is always a threat to win.

The wildcard in the deck for the men's race is Logan Owen, the Pacific Northwest native who amassed his own string of junior and U23 national championships before turning his attention full time to the road, where he races on the WorldTour for EF Education First.

Owen couldn't pass up the temptation to race nationals in his backyard at a venue where he cut his 'cross teeth, and so the 24-year-old traveled to a race in Arkansas earlier this fall to collect some UCI points and secure a starting spot nearer to the front row.

Owen has been out of the scene for several years now, but he's got a closet full of stars-and-stripes jerseys at home as a resume for entry into the race, and he  shouldn't be counted out so close to home.

Andrew Dillman (SDG Muscle Monster) was fifth in the Pro CX and is on the start list, along with Tobin Ortenblad (Santa Crux-Donkey Label) and Cody Kaiser (Lange Twins-Specialized), among others