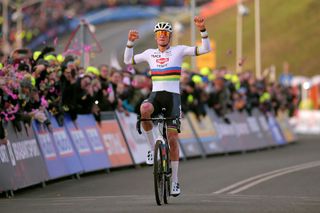 Who can stop Mathieu van der Poel from taking his third straight UCI Cyclo-cross World Championship victory on Sunday? Considering the Dutchman's utter dominance over the past two seasons, it appears that only luck could spoil his chances.

But there are five other championship races, with the debut of the Junior Women's event this season. The Elite Women's race should be one of the most hotly contested of the weekend with Dutch riders Lucinda Brand, Ceylin Carmen del Alvarado, and Annemarie Worst trying to unseat defending champion Sanne Cant (Belgium).

Right now, the course in Dübendorf, Switzerland is dry, but the weather is expected to turn before the racing starts with a bit of rain predicted for Saturday and steady showers on Sunday.

If dry, the race will be fast on the mostly flat course, but mud could make for a trickier than expected situation, especially for the elite men's race. Sven Nys, head of the Telenet Baloise Lions team and two-time former world champion, predicts "an old-fashioned mud 'cross" and "no tactical games", saying the course is heavier than anyone expected.

Whether Nys' assessment is an exaggeration remains to be seen. Despite being in a mountainous country, the Dübendorf parcours is on perhaps the flattest patch of land in all of Switzerland, being held at an airfield in this Zürich suburb. The wide, straight stretches are interrupted only by a manmade berm, several bridges and a run-up.

In 2017, Van der Poel was the clear favourite but suffered four different punctures on the course in Bieles, Luxembourg. In 2018, Van der Poel made several mistakes and never recovered as Belgium's Wout Van Aert rode away to his third world title.

The Belgians will have to hope that the Dutch sensation runs afoul of lady luck again this year if they want the top step of the podium. With Van Aert at less than his best after a long recovery from his leg injury suffered at last year's Tour de France and a third-row starting position, it will be up to his teammates Eli Iserbyt, Laurens Sweeck and UCI World Cup winner Toon Aerts to challenge Van der Poel.

The Elite Women's race should offer up a scintillating competition with at least five riders capable of climbing onto the top step.

Defending champion Sanne Cant of Belgium has faced fierce competition from the Dutch riders this season, and has won only two races aside from the her national title. The record says less about Cant's form than it does of the impressive rise of the Dutch pair Ceylin Carmen del Alvarado and Annemarie Worst.

Alvarado, second overall in the World Cup after a dramatic finish in Hoogerheide, opted to upgrade from the U23 ranks for Worlds after winning the elite Dutch championship.

Alvarado's main competition comes from within her own team, with Worst, Lucinda Brand and European champion Yara Kastelijn all top picks for the podium.

In the absence of another Dutchwoman, seven-time champion Marianne Vos, who is out with a groin injury, Pauline Ferrand-Prévot (France), who had iliac artery surgery and Jolanda Neff (Switzerland), who was seriously injured in a mountain bike crash in North Carolina in December, the list of outsiders is smaller than usual.

The home country has its best shot at the world title in the U23 Men's race, with Kevin Kuhn – winner of three World Cups this season – one of the favourites. Like most of the categories, the Dutch also have a top favourite in Ryan Kamp.

The U23s should be another hard-fought and wide-open race, however, with Tabor World Cup winner Thomas Mein (Great Britain). Frenchman Antoine Benoist – last year's bronze medalist – is also in with a chance, as are two-time junior world champion Ben Tulett (Great Britain) and Niels Vandeputte (Belgium).

With Alvarado in the elites, the rainbow jersey competition for the U23 women looks a little bit more open, but defending champion Inge van der Heijden (Netherlands) is the outright favourite.

Van der Heijden is a regular in the top tens of the elite women's races and ranked seventh in the world. Her main competition will come from Briton Anna Kay, who landed five elite podium placings this season and was second to Alvarado in the U23 European Championships, and fellow Dutch rider Manon Bakker, runner up in the U23 Dutch Championships.

Kay and Bakker's trade teammate Marion Riberolle (France) has had strong rides as of late and Hungarian Kata Vas was impressive in the Christmas period races in Belgium.

American Katie Clouse injured her shoulder in Namur but is back to full health and an outside contender for the victory.

Cyclo-cross history is being made in 2020 with the introduction of the Junior Women's race.

Once again the Dutch have a top candidate for victory in Shirin van Anrooij, who is the only Junior to land on the elite podium this season. Her compatriot Puck Pieterse – the European champion – is a rival, having taken four elite top ten placings this year.

Frenchwoman Olivia Onesti, 17, has been quietly racking up elite victories on home soil and could upset the Dutch riders, while American Maddie Munro, the Pan-American champion, is another outside contender having won one of the Helen 100 junior events.

The Belgians have their best shot at the rainbow jersey in the Junior Men's event, where Thibaut Nys, son of cyclo-cross legend Sven Nys, is the top favourite.

Nys junior has won 17 races this season – including six World Cups, the overall title title, plus the Belgian and European titles. However, Nys' technical skills might not give him as much of an advantage on the straightforward Dübendorf course.

Look for Swiss rider Dario Lillo to try to upset the Belgian. He's on form after taking the victory in Hoogerheide. Belgians Lennert Belmans, second to Lillo last week, and Emiel Verstrynge, plus American Andrew Strohmeyer, the Pan-American champion are other top contenders.