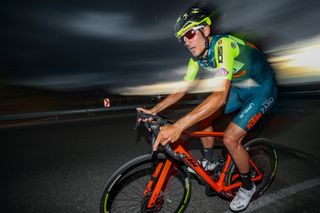 Alessandro Fedeli (Nippo Delko One Provence) made the stage a double success for Italy, following Costa's attack 9km from the line before beating the Portuguese champion to the line on the uphill finish.

Costa, who lay 16 seconds down on GC at the start of the day, was a real threat late on, taking the virtual race lead as he and Fedeli gained 20 seconds over the peloton at one point. The pair couldn't hold the advantage, though, leaving the finale a fight between Wackermann and Stewart.

The young Briton had taken three bonus seconds at the first intermediate sprint of the day, moving to within two seconds of Wackermann's position. Come the final though, he wasn't in position to take additional time, and thus had to settle for second overall – his best result of the 2020 season.

The final stage of the Tour du Limousin, another hilly day taking in 167km from Lac de Saint-Pardoux to Limoges, would see the final battle for the overall title, with Stewart lying just five seconds down on Wackermann overnight, while a further 11 riders lay within 20 seconds of the race lead.

Several members of the AG2R La Mondiale squad were forced to leave the race after Larry Warbasse's positive COVID-19 test, including 13th place man Geoffrey Bouchard, while four others also pulled out before the end.

Groupama-FDJ controlled the early proceedings with an intermediate sprint on offer after just 26.5km. The plan worked, with Stewart taking the three bonus seconds on offer in Roussac, moving him within two seconds of the race lead.

The peloton let the move go, with Hurel grabbing the second sprint of the day to take the lead in that competition. After an hour of racing they led by two minutes, with Groupama-FDJ still in control.

70 kilometres into the day, Peio Goikoetxea (Euskaltel-Euskadi) and Alexis Gougeard (AG2R La Mondiale) jumped away from the peloton and successfully made it five out front. The peloton, led by UAE Team Emirates and Groupama-FDJ, lay a minute back.

Rain hit the mid-part of the race, but aside from Ferron losing touch with the break with 55km to go, there was little drama as the GC contenders awaited a tough finale consisting of three hilly laps around Limoges.

Gougeard and Bidard went on the attack with 20km to go, keen to end the race in a flash of glory, though the peloton had moved to within 30 seconds by that point. Bidard dropped back 7km later, while Gougeard made it the final 10km before being caught.

Rui Costa (UAE Team Emirates) kicked off the attacking up front, going away with Alessandro Fedeli (Nippo Delko One Provence) while Stewart and Wackermann held fire in the peloton. The duo worked their way to a 20-second lead, and the combined efforts of Arkéa-Samsic, Team Sunweb and Groupama-FDJ just couldn't bring them back over the rolling final 10km.

Fedeli outfoxed Costa in the final to take his first victory of the season, while behind, Wackermann was safe as Joel Suter (Bingoal-Wallonie Bruxelles) swept up the final 4-second time bonus for third.