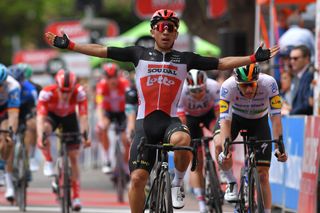 Lotto Soudal’s Caleb Ewan wins stage 4 of the 2020 Tour Down Under ahead of Irish road race champion Sam Bennett (Deceuninck-QuickStep). Both riders will be among the favourites for the sprinter-friendly 2020 Milano-Torino (Image credit: Getty Images Sport)

It's Italy's oldest bike race – having first been held in 1876 – but Milano-Torino takes on somewhat of a new look for 2020 this Wednesday, with a calendar shift forced by the UCI due to the coronavirus pandemic and a new role as a warm-up event for the coming weekend's Milan-San Remo, as well as a significantly flatter, faster course than normal, which has served to attract many of the world's best sprinters.

Milano-Torino returned in 2012 after a five-year hiatus, and took up a new autumn slot, acting as one of the end-of-season Italian Classics that attract riders with form from the World Championships and those looking to save their seasons.

It used to act as more of a sprinters' race, and came, like it does again this year due to the necessary calendar shuffle, just ahead of Milan-San Remo, but it has been moved back and forth between spring and autumn slots multiple times during its history.

Milan-San Remo is sometimes known as 'The Sprinters' Classic', although the fast men still have to get over some difficult climbs that come before the descent to San Remo, and the course has nothing on this year's Milano-Torino when it comes to its suitability for sprinters. There are a few small 'bumps' along the way, but the highest point of the race is at Grana, midway through, just after the day's feed zone, when the riders will hit an altitude of just 276 metres.

Barring a major crash, then, it can't really come down to anything other than a bunch sprint in Stupinigi, on the outskirts of Turin, after 198km of racing. As a result, a huge number of sprinters and capable fast-finishers will line up – most hoping for a last-minute hit-out before San Remo, yes, but with plenty of them happy to try to give it everything to add Milano-Torino to their palmarès in its own right, especially due to the possibility of the coronavirus halting the cycling season once more if a second wave hits.

We're guaranteed a new winner this year, too, in that none of the recent victors will line up in Mesero – some 30 kilometres west of Milan – while last year's winner, Michael Woods, and his entire EF Pro Cycling squad, has decided to give it a miss with the tough finishing climb of Superga having been dropped from the route.

The favourite to win surely has to come from among pure sprinters Caleb Ewan (Lotto Soudal), UAE Team Emirates' Fernando Gaviria, Arnaud Démare (Groupama-FDJ) and Sam Bennett (Deceuninck-QuickStep), while opportunists such as Peter Sagan (Bora-Hansgrohe), last year's Amstel Gold winner Mathieu van der Poel (Fenix-Alpecin) or perhaps even last weekend's Strade Bianche winner Wout Van Aert (Jumbo-Visma) will try to be in the mix in what is likely to be a frenetic finish.

It will be Ewan's first race back since cycling's shutdown, although he'd already shown he'd come out of last winter in great shape with two stage wins at the Tour Down Under and another at the UAE Tour, but the Australian will be looking to hone his form ahead of the upcoming, rescheduled Tour de France, where he won three stages on his debut last year.

Gaviria and Bennett both tasted victory with a stage win apiece at last week's Vuelta a Burgos, while Démare will be looking to better his two second-place finishes at Burgos and rediscover the form that won him Milan-San Remo in 2016. Like the rest, he'd love to be able to record two major wins over the course of four days.

Other riders to watch out for include young Trek-Segafredo sprinter Matteo Moschetti, who'll have the extra motivation of being on home turf on his side, and new Arkéa-Samsic signing Nacer Bouhanni, who scored stage wins at the Saudi Tour and the Tour de la Provence earlier this season, and would dearly love to re-establish himself among the cream of the world's top sprinters after what's been a quiet, less-than-happy period for the Frenchman at Cofidis these past couple of seasons.

Everything really does point to the best of them spreading out across the road on the Viale Torino in Stupinigi for a bunch-sprint battle royal.