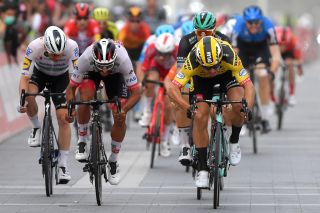 UAE Team Emirates’ Fernando Gaviria (left) will be one of a host of top sprinters competing at the 2020 Milano-Torino (Image credit: Getty Images Sport)
JUMP TO:

Milano-Torino takes place today, Wednesday, with a changed identity. Usually a trophy-hunting affair for the puncheurs, this year it's a prime sprint opportunity for Milan-San Remo hopefuls, and all the big-name fast-men will be on the start-line this morning.

From Peter Sagan (Bora-Hansgrohe) and Caleb Ewan (Lotto Soudal), to Mathieu van der Poel (Fenix-Alpecin) and Wout Van Aert (Jumbo-Visma), the field will be top-notch, and the grand finale well worth a watch.

Cyclingnews will be bringing you live coverage, reports, results, photos and news for the race. Read on to find out how to watch Milano-Torino via live stream, no matter your location, with ExpressVPN.

Milan-San Remo may take place on August 8 after all

Normally, Milano-Torino falls in the late season as riders are winding down after a long year of racing, but with a five-month break in competition because of the COVID-19 pandemic, it will be a very different race in 2020.

Not only is the course flattened out, but the field is stacked with all of the sprinters itching to notch up a win – just in case the spread of the virus stops racing again – and warm up their legs for the weekend's Monument, Milan-San Remo.

The 1.Pro-ranked race has attracted 14 WorldTour teams this season, with eight ProTeams rounding out a 22-squad start list. The change of course sees EF Pro Cycling take a pass, as last year's winner Michael Woods gears up for a run at the Tour de France.

At 198km in length, the race will be a good test of endurance without sapping too much from riders' legs ahead of Milan-San Remo, and all the big names are due to be in attendance: Peter Sagan (Bora-Hansgrohe), still looking for his first win of the season, Mathieu van der Poel (Alpecin-Fenix), aiming to make up for an untimely puncture that spoiled Strade Bianche for him, Wout van Aert (Jumbo-Visma) – the winner of Strade Bianche – and Vuelta a Burgos stage winner Fernando Gaviria (UAE Team Emirates).

Sam Bennett (Deceuninck-Quickstep) is another favorite after a fine uphill stage win in Burgos, as is Arnaud Démare (Groupama-FDJ) after two second places in the Spanish stage race.

It will be the first race back for Caleb Ewan (Lotto Soudal), who notched up three wins in the pre-COVID part of the season, while Trek-Segafredo's young phenom Matteo Moschetti is aiming to reconfirm his two victories in Mallorca in January, having rehabilitated a fractured pelvis, scapula and vertebra suffered in February.

With hardly an autostrade overpass to slow the peloton, it should be a wickedly fast trip from Mesero to Stupinigi and a great test for the sprinters' lead-out men.

Read on for all the details of how to watch them in action at Milano-Torino on Wednesday.

Milano-Torino will be aired comprehensively across a number of networks, and will be aired live across Europe, Asia and Australia via Eurosport and on the Eurosport Player.

The GCN Race Pass, available on the GCN app, is also airing the race in the UK. Access will set you back £39.99 for a year, though a special offer currently lets you subscribe for just £19.99.

The race will also be shown on various broadcasters around Europe, including Rai Sport in Italy,  Sporza in Belgium and EITB in the Basque Country.