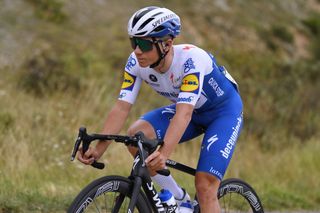 Remco Evenepoel (Deceuninck-QuickStep) will race his first Monument in the shape of the 2020 Il Lombardia (Image credit: Getty Images)

This year's Il Lombardia has changed from an end-of-season final showdown to a mid-summer Monument, and so 30°C temperatures will replace the falling leaves and autumn shadows. However, the history and prestige of Il Lombardia means that it remains a special race.

Il Lombardia, or, as it was originally called, il Giro di Lombardia, was first held in 1905, and cycling legend Fausto Coppi holds the record for the most number of wins at the race, with five.

The Il Lombardia profile means it's always a race for the climbers and strongest riders, and is arguably cycling's most difficult Monument, with over 4,000 metres of climbing and far longer climbs than those of Liège-Bastogne-Liège. It has always attracted the Grand Tour riders, but the hectic, rescheduled race programme also means that many of the usual contenders are fighting in the mountains of the Critérium du Dauphiné rather than racing in Italy. However, the presence of Remco Evenepoel (Deceuninck-QuickStep) and a fascinating rivalry with Vincenzo Nibali (Trek-Segafredo) now tops the bill, and could offer up a battle between generations.

Michael Matthews (Team Sunweb) was due to ride, but has been ruled out by the injures he suffered after scraping the wall on the climb of the Poggio during Milan-San Remo.

The start and finish cities of Il Lombardia have oscillated between Bergamo and Como in recent times, and this year's race will again start in the centre of Bergamo Basso and end overlooking the shores of Lake Como.

Race organiser RCS Sport announced a late change on Tuesday, cutting 12km from the early part of the route to bring it down from 243km to 231km. That will make it the shortest edition of the race since 1960, but the summer heat and expected 30°C temperatures will still make for a hard day out.

As Remco Evenepoel realised during his long recon ride on Wednesday, the finale of Il Lombardia starts early, with the final 70km stacked with long and testing climbs.

The iconic road from the shores of Lake Como up to the Madonna del Ghisallo is the first, with the famous cyclists' chapel bells no doubt ringing out as the riders pass by.

Remco Evenepoel: I hope I can make memories at Il Lombardia

Crowds limited at Il Lombardia due to COVID-19 risks

A short descent leads to the Sormano. After a few kilometres of steady climbing, the Muro (wall) part of the Sormano rears its head, with the riders facing a 2km-long narrow, very steep road with a gradient up to 15 per cent, with very tight hairpins and ever more painful gradients that exceed 25 per cent in several points. The Muro was taken out of Il Lombardia after rider protests in the 1970s, but returned recently to add some pain. It now makes a key first selection in the peloton, with only the strongest and best-placed riders securing a place in the front group that forms over the top.

The long, harrowing descent on the other side is one of the trickiest in pro cycling, and caused several riders to crash in the 2017 edition, with Jan Bakelants, Laurens De Plus, Simone Petilli and Daniel Martínez all injured after going off-road into the valley. A flat road takes the riders to the edge of Como, but they are cruelly sent up the 4.2km, 9.7 per cent Civiglio overlooking the city. The winning move often emerges in the final kilometre of the Civiglio, with Nibali opening a gap and then using his descending skills to extend his lead in 2017. Thibaut Pinot made a similar move in 2018, as did Bauke Mollema in 2019.

Absent in 2018, the San Fermo di Battaglia climb is back and will ensure a final showdown between the strongest riders who emerge on the Civiglio. Whoever reaches the top first usually dives down the fast descent and wins alone in Como.

Can anyone stop Remco Evenepoel?

With Nibali clearly not yet at his best, Evenepoel seems unstoppable, even if he showed respect to 'The Shark of Messina', suggesting that his Il Lombardia knowledge can never rule him out.

Bennett, Geoghegan Hart and Fuglsang could perhaps be Evenepoel's biggest danger, while Evenepoel's only possible weakness could be the heat and the long race distance. Il Lombardia is Evenepoel's first-ever Monument Classic, and so he could pay for any pre-race overconfidence in the final, extra hour of racing. However, he has already won nine races in 2020, including all four stage races he has ridden.

Bennett continued Jumbo-Visma's dominance at the Gran Piemonte, and was the strongest on the final climb. If he can distance Evenepoel on the Civiglio, when watts-per-kilo count more than raw power, he could perhaps stay away to the finish and hit the jackpot before also joining up with the Jumbo-Visma 'killer wasps' squad for the Tour de France.

Fuglsang was impressive at Strade Bianche, with perhaps only his generosity and early attack costing him a place in the finale when Van Aert attacked. He was also second to Evenepoel at the Tour de Pologne, and importantly won last year's Liège-Bastogne-Liège.

Geoghegan Hart is on Team Ineos' long list for the Tour de France, perhaps even ahead of Chris Froome, and so a good ride at Il Lombardia will only help his chances of final selection. He can read a race well and can climb as well as most, making him an ideal contender.

Woods, Schachmann, Ulissi, Aru and the rest are arguably outsiders, but all have a chance. If they are smart and fortunate, they could let Deceuninck-QuickStep and Trek-Segafredo do all the work controlling the race and then find a way to defeat Evenepoel and Nibali over the Civiglio and San Fermo climbs.

There have been random, surprise winners when Il Lombardia is held at the end of the season, so why not in the summer heat in the heart of the rescheduled COVID-19 season?