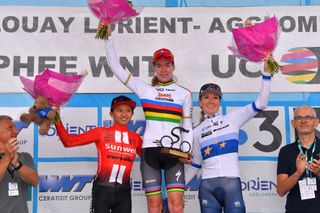 It’s an unusually busy week of racing in Plouay, France, with the UEC European Championships being moved to the French town and held from August 24-28, now being held alongside the GP de Plouay-Lorient Agglomeration Trophee WNT on August 25.

The long-running French one-day race for women maintained its August position on the revised Women’s WorldTour circuit despite the cancellations and changes due to the COVID-19 coronavirus pandemic that halted the international calendar for five months. It now forms part of a block of racing in France that will conclude with La Course by Le Tour de France on August 29.

The small village of Plouay annually hosts the one-day race. Now in its 19th edition, the inaugural event was in 2002 as part of the former Women’s World-Cup series.

There have been significant changes to this year’s course, which has been shortened to 101.1km, and takes on a 44km opening loop followed by a four laps of a smaller 13km circuit, and a total of 10 categorised ascents.

The peloton will embark on a longer opening circuit that includes categorised climbs over Kerhoat (1.4km at 6.4 per cent) near the end of the loop, followed by the Restergal (1km at 5.6 per cent). The riders will then cross the finish and start the smaller finishing circuit for four full laps.

The punchy 13km finishing circuit, which the UCI announced as new this year, opens with the Cote du Lezot (1km at 4.7 per cent, with sections as steep as 19 per cent) followed by a small descent and flatter sections before reaching the Montee de Lann Payot (1.3km at 2.6 per cent) that is located and then the Cote du Pont-Neuf (1.5km at 4.2 per cent) located 2km from the finish line.

Defending champion Anna van der Breggen, who recently won the road race at the Dutch Championships and the time trial at the UEC European Championships, will take the start line with Boels Dolmans at the GP de Plouay.

She will have a strong support team that includes former world champions Chantal van den Broek-Blaak and Amilie Dideriksen, along with Christine Majerus.

"This season, I’m happy we can do a lot of races," said Van der Breggen after winning the time trial at the European Championships in Plouay on Monday. "We will have to see if there’s a World Championships, but if the season goes like this, I can’t complain. I really enjoy to see what’s next but for now I hope to have a really good week."

Liane Lippert (Sunweb) is currently leading the Women’s WorldTour after winning the opening round at the Cadel Evans Great Ocean Road Race in February and placing 16th at Strade Bianche at the beginning of August. She will be hoping to stay in the purple series leader’s jersey, however, she has a number of teammates who could also win the race including newly-signed sprinter Lorena Wiebes and Leah Kirchmann.

"Liane arrives at the race as the leader of the Women’s WorldTour standings and even though it will be a challenge, we’ll fight hard as a team to try and keep the jersey. The team are just coming back from altitude camp in Kühtai, so we are all motivated to put on a good show,” said Sunweb director Hans Timmermans.

Van Vleuten, who has won the last five races that she has started since winning the rainbow jersey last fall, will take the start line with a strong line-up that includes Jessica Allen, Grace Brown, Gracie Elvin, Sarah Roy, and Georgia Williams.

Van Vleuten won the race in 2011 but said this year's course doesn't suit her as well, and that should would like to support one of her teammates to victory.

“Plouay is not my ideal course, it is not really hard enough. Before, when I won in 2011 it was a little bit harder so I am a little bit sad about that, that they took some climbs out, but still I have the opportunity and I think also the other girls can profit from the type of race of it is," Van Vleuten said.

“I think it is a typical race where people will watch me so I will also be very happy if I can set it up for other girls in the team.”

CCC-Liv’s team will include Marta Lach, who will appear for the first time in her Polish champion's jersey, along with Riejanne Markus, Pauliena Rooijakkers, Agnieszka Skalniak, Evy Kuijpers and Valerie Demey.

“The course is somewhat different this year as opposed to other years," said CCC-Liv director Jeroen Blijlevens. "The top of the last climb is a bit closer to the finish line. In addition, the climbs are slightly closer together. Who knows, this may bring more attacks. So we will always have to be focused. There is no lack of confidence in this team.

"Marta Lach, brand new Polish champion, will start in her red and white jersey for the first time. Hopefully she can also show at this level that she is capable of amazing things. The GP de Plouay is a race for punchers and should suit her.”

Former world champion Lizzie Deignan, who won the race in 2015 and 2017, will line up with Trek-Segafredo alongside newly-crowned Italian time trial champion Elisa Longo Borghini and US road race champion Ruth Winder.

Frenchwoman Aude Biannic will lead her Spanish outfit Movistar Team Women on the punchy circuit. Cecilie Uttrup Ludwig, who is on great form after winning Giro dell’Emilia last week, will be one to watch as she leads her French team FDJ Nouvelle-Aquitaine Futuroscope in Plouay.

Canyon-SRAM will line up with options that include Kasia Niewiadoma and Alice Barnes. Equipe Paule Ka will field a strong team led by Elizabeth Banks.