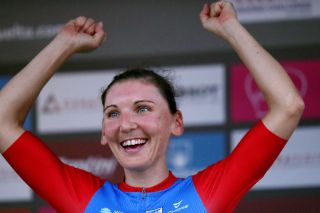 The 98km race on the hilly auto racing circuit kicked off with an attack by Adelheid Schütz but she was quickly reeled in and the peloton remained together through the halfway mark when Schütz again attacked with Dorothea Heitzmann.

The duo gained a minute's lead on the peloton but an attack from Brennauer and Erath sparked the chase with 35km to go. As the pair were about to be caught, there was a counter attack by Svenja Betz (RSG Gießen Biehler).

Betz caught and passed Schütz, who was then caught by the peloton, and put in an impressive ride to remain clear coming into the final kilometre.

With 500m to go, the escapee was finally caught and Brennauer claimed the win.